Most mobile (a.k.a. manufactured) homes are designed with roofs which are only engineered to support a minimal snow load – most generally the maximum design roof snow loads range in the 30 to 40 psf (pounds per square foot) range. 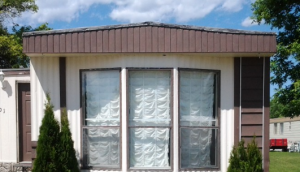 Besides the issue of snow, many mobile homes are designed with roof slopes of less than 4/12 – in many cases to allow them to be transported down highways without being remodeled by overpasses. The flatter roof slopes tend to have issues with leaks much easier than do steeper slopes, especially around penetrations in the roof such as attic, plumbing and heating vents.

One of my loyal readers Genna from Traverse City writes: “Hello! Can a roof-only pole barn be constructed over a mobile home? Not directly on top of it, like a roof, but over it, covering the porches and surrounding area as well, probably ten feet past the mobile home in each direction. Thank you!”.

In some states, it is against the Building Code to be able to attach directly to a mobile home to do things like increase roof slope with an overlaid roof. In jurisdictions such as these, the only solution becomes to utilize what is known as a “snow roof”.

Snow roofs can be designed to not only cover the manufactured home itself, but also to incorporate covering decks, porches and extensions. I’ve designed them to allow for both covered parking as a carport beyond an endwall, as well as fully enclosed for garage space. 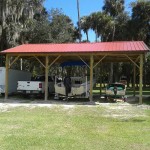 When planning a snow roof, it is prudent to lay out the locations of doors and windows on each side of the mobile home, so as not to end up with a column which would block the view, or obstruct a doorway. This can result in some ‘interesting’ column spacing – where every bay along the sidewalls is a differing width. The beauty of post frame construction is it easily adapts to these changes in spacings from what might be considered the norm (every post evenly spaced).

In order to get the most from your investment in a new mobile home cover, it is best if one (or ideally both) endwalls can be covered to the ground, as this allows for the transfer of wind shear loads without the need for huge columns embedded deeply in the ground to prevent over turning.

You can read more about roof only buildings here: https://www.hansenpolebuildings.com/2015/04/roof-only-pole-buildings/

Have or planning to invest in a mobile home? A snow roof might be in your future. If so, a post frame cover is going to give the ultimate in affordability and flexibility as a design solution