As a college teenager, the first “house” I owned was a single wide manufactured (aka mobile) home. It served its purpose at the time, as it was an economical starter home. I did some minor remodels to it – adding a coat closet by the front door and putting in air conditioning, but nothing as extensive as attempting to make a permanent addition.

In most jurisdictions (and rightly so) Code Officials will not allow structural additions to manufactured homes, even when the home is permanently affixed to a concrete foundation which extends below the frost line. Why? Because the main longitudinal structure of a manufactured home is the steel framework which rests several feet in from each sidewall.

For practical purposes, the exterior walls of a manufactured home are not “load bearing” for more than their own weight and the weight of the home’s roof system.

This means any “addition” must be free standing and able to support its own weight without any structural contribution from the manufactured home.

Probably the most common additions to manufactured homes would be garages, usually placed gable to gable at an end. This makes for a relatively simple addition of a pole building, by placing columns up against the existing endwall to support the weight of the garage, without loading onto the manufactured home. Any door in the common wall needs to be replaced with a properly fire rated door, and any windows removed. The wall must have sufficient gypsum wallboard added to achieve one-hour fire resistance. If the interior (towards the living space) side of the wall has ½” drywall, it may be possible to add just a single layer of 5/8” Type X (for further reading on fire ratings: https://www.hansenpolebuildings.com/blog/2013/11/establishing-fire-resistance/).

Adding a garage to the sidewall of a manufactured home may prove impossible, unless the home is set high enough to allow a gabled roof to come in below the top of the wall (avoiding the necessity of a valley to be placed upon the manufactured home roof). A single sloping roof off the side may be possible, but a roof slope of no less than 3/12 should be used. The same fire resistance issues exist as with garages on endwalls. 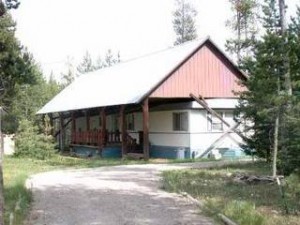 The next most common pole building combined with a manufactured home is what is commonly known as a “snow roof”. Typically these are roof only structures, which may have what is called a “roof skirt” extending down to cover the space between the top of the wall of the home and the eave of the pole building roof. In many northern climes, the roof snow loads are greater than the ability of the manufactured home to support, making the snow roof an essential feature to preserve the manufactured home roof from collapse. Thought should be given in planning, to avoid placing the pressure treated columns in front of windows and doors. Most jurisdictions will also require the snow roof to be designed to allow for the home to be removed by pulling it out from one end.

With careful planning, pole buildings can become useful and affordable additions to manufactured homes. As always, consult with your jurisdiction’s Planning and Building Departments before considering such an endeavor.