Your Planning Department May Dictate Your Post-Frame Siding Choices

Although most of us general population members are unawares, your local Planning Department has a great deal of power over what you can or cannot do with your own property. This goes right down to decisions on siding choices for your new post-frame building! (Read more on dealing with Planning Departments here: https://www.hansenpolebuildings.com/2013/01/planning-department-3/).

Here is a case where a city had enacted a restrictive ordinance and how an architect went about getting further clarification.

Senior Planner Justin Taylor presented a discussion on architectural panels and what city ordinances say about them under “development plan design standards.”

He said a question before the plan commission was in regard to architectural panels.

“Typically, pole barn siding isn’t permitted per this ordinance in these zoning ordinances (C-2,3,4,5), but a request has been made if they can use a certain type of siding. So at this time, our planning department doesn’t feel comfortable making a decision so it brought it before the board for its review, and that’s where we’re at.” Taylor said. 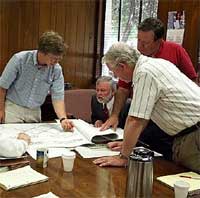 He said the Commission can approve or disapprove type of panel being requested to be used. If the Commission approved panels in this specific instance, Taylor said this decision could be applied to future city buildings. He said it wouldn’t necessarily change city’s ordinance language, but it would give city’s planning department more guidance in what is acceptable in the city.

Jim Malcolm, a Claypool architect, represents JLane in this matter.

“What brought this whole thing about was when I asked (City Planner) Jeremy (Skinner), (the ordinance) says metal architectural panel is useable. When we go look at the various suppliers, everybody has an architectural panel … we’re asking for that (specific) one, but also in the long term consideration of some of the architectural panels that are out there,” Malcolm said.

Dan Robinson, of Robinson Construction, who is trying to price costs for JLane’s building, said they’re trying to get clarity and what kind of paneling is and isn’t allowed by the city.

Malcolm, Robinson and the Commission then discussed different types of architectural panels, different qualities and what makes some paneling better than others.

In the end, the Commission acknowledged city’s planning department needed to revisit and reconsider the city’s ordinance regarding architectural panels.

It also approved a motion from James Emans, city engineer and Commission member, specifically regarding the JLane paneling.

His motion was “that the presented concealed-fastener insulated panel with an approximate 7.2 profile … steel fabric complies with the intent of the ordinance and is allowed.”

Thanks to Times Union staff writer David Sloane for information appearing within this article.