I appreciate long time reader Vincent Phelps – Vincent, I know you are reading this and thank you!

Vincent appears to be always on the lookout for technology and new and better ways to build bigger mousetraps (buildings).

Here was a recent question he sent to me on Facebook (yes, we are Facebook friends): “Titanium hammers claim to put a greater amount of energy into the nail. What impact (no pun intended) does that have on galvanized fasteners? I’ve seen failure of the protective coating and even the heads being broken by worn out air nailers on pallet boxes, would the change in energy transfer be more or less likely to damage the coating?”

To arrive at the answer, it is best to know about the parts.

I was frankly unfamiliar with titanium hammers until my bride and I assisted Eric in the construction of his self-storage building (https://www.hansenpolebuildings.com/2014/06/builder/). 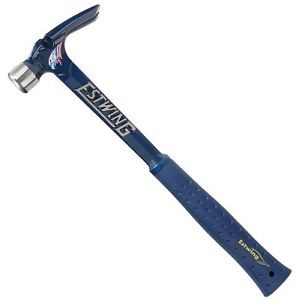 As luck would have it, someone had ‘borrowed’ her favorite framing hammer, so on a visit to The Home Depot® in Fargo, she invested in a new titanium one.

Now as teens my younger brother, as well as all of my male cousins, and I had the opportunity to be what my cousin Kim referred to as MEI Slaves (Momb Enterprises, Inc.). Kim even had a crude sign which stated the same and which he nailed up at jobsites! Some of the adventures of framing with Kim have been written about previously: https://www.hansenpolebuildings.com/2011/06/before-the-pole-barn-guru/.

I had one feature which was popular when it came to framing standard eight foot tall walls. At 6’5”, with long arms, I could wield a mean (as in heavy) hammer – which allowed me to nail double plates on walls from the floor. Saved having to go up and down ladders!

Having aged a few years since framing with the family, I’ve dropped down from the 32 ounce head framing hammer, to a more manageable 24 ounce. Let me tell you, even a day of swinging this puppy and my right forearm felt like it was going to explode!

Then I happened to pick up my bride’s titanium hammer – whoa! It was light. And would still pulverize a nail!

The major attraction to using a titanium hammer is vibration and weight. Titanium, as a metal has the same strength as steel with 45% less weight, and exhibits much less vibration than steel. Some hammer manufacturers claim up to 10 times less vibration.

The fact titanium hammers weigh-in at half as much as their steel counterparts, while still delivering the same amount of power to the head of the nail is impressive. This reduction in weight makes for a great argument the user will experience less fatigue over the course of a day, week, and year.

Reduction in recoil-shock vibration is another great feature of titanium. It goes to reason titanium can help to save your elbow from the shock of hammering. This was the argument which got my attention. Less damage to the body is a good retirement plan!

The lighter titanium hammer also allows users to obtain 97% of their hammer swing energy going into the nail, compared to 70% with a regular steel hammer. This results in a more efficient nail-driving.

Steel hammers are still preferred by many carpenters because they cost way less and exhibit more “knockdown power.” The truth of this argument is a moot point, we all know heavier hammers are always more effective at pounding framing members or beams into place, or when moving a wall into position.

Titanium hammers offer excellent vibration dampening, and the lighter weight metal translates to easier swings with less fatigue and impact on the nerves and tendons in the arm.

Using a titanium hammer makes sense, especially when I think of my own injuries and guys I know who are in a “survival mode.”  Having to take pain meds just to keep pain and swelling down from swinging a hammer is just plain sad.

My take away from the titanium vs. steel argument is titanium’s primary ergonomic benefit is less recoil with less fatigue being a secondary benefit. I predict, over time, you will see a reduction in arm injuries caused by frequent heavy hammer use.

In the clip, Reactions asserts Iron Man’s suit is most likely made out of a nickel-titanium alloy called nitinol. Nitinol is light enough to not weigh Iron Man down as he’s flying around in the sky, and it can be re-formed after sustaining damage.

If titanium can work for Tony Stark’s suit, it is good enough for my next hammer!