What Fails First in a Fire? Part II

What Fails First in a Fire- the Truss Lumber or the Steel Truss Plates? Part II

If you didn’t read my blog yesterday, you will think me out in left field until you do.  Take a few extra minutes and go back and read Part I. You will be glad you did!

Continuing from yesterday’s blog on hay catching fire, and causing a pole barn to burn:

What do you do if you suspect your hay is heating? 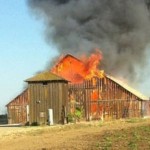 A simple probe inserted into the haystack can accurately monitor temperature. You can make a probe from a 10-foot piece of pipe or electrical tubing. Sharpen the pipe or screw a pointed dowel to one end, then drill several 1/4-inch diameter holes in the tube just above the dowel. Drive the probe into the hay stack and lower a thermometer on a string into the probe. The thermometer should be left for 10 minutes in several areas of the stack to ensure an accurate reading.

Watch for the following temperatures:

150 degrees F is the beginning of the danger zone. After this point, check temperature daily.

160 degrees F is dangerous. Measure temperature every four hours and inspect the stack.

At 175 degrees F, call the fire department. Meanwhile, wet hay down and remove it from the barn or dismantle the stack away from buildings and other dry hay.

At 185 degrees F hot spots and pockets may be expected. Flames will likely develop when heating hay comes in contact with the air.

Take precautions. Pockets may have already burned out under the hay surface.

Before entering a barn, place long planks on top of the hay. Do not attempt to walk on the hay mass itself. Always tie a rope around your waist and have a second person on the other end in a safe location to pull you out should the surface of the hay collapse into a fire pocket.

In the past, farmers sprinkled salt on wet hay as it was stacked to prevent spoilage, but salt does not prevent spontaneous combustion. Dry ice, liquid nitrogen or carbon dioxide gas pumped into the hay can prevent combustion by eliminating the oxygen from the hay mass.

Hay fires from spontaneous combustion occur infrequently in the arid western U.S., but can be a hazard for new hay or old stacks.

As the pressed steel connector plates do not appear to be the weak link of the truss system, if the investment of time and effort is going to be put into what to do when there is a fire, rather than preventing one to begin with, then the use of fire retardant treated lumber for the trusses might prove to be a better place to spend one’s money.