Back to Vincent’s Question 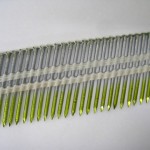 A few days ago Vincent Phelps postulated this question: “Titanium hammers claim to put a greater amount of energy into the nail. What impact (no pun intended) does that have on galvanized fasteners? I’ve seen failure of the protective coating and even the heads being broken by worn out by air nailers on pallet boxes. Would the change in energy transfer be more or less likely to damage the coating?”

My first thought was the nails being used on pallets, if they are galvanized at all, are going to be electroplated.

I’ve written before on the Building Code non-acceptance of electroplated nails in contact with pressure preservative treated lumber: https://www.hansenpolebuildings.com/2012/10/galvanized-nails/.

Electroplating is a process which uses electrical current to reduce cations of a desired material from a solution and coat a conductive object with a thin layer of the material, such as a metal. Electroplating is primarily used for depositing a layer of material to bestow a desired property like corrosion protection. The process used in electroplating is called electrodepositing; the process is analogous to a galvanic cell acting in reverse.
The part to be plated is the cathode of the circuit. In one technique, the anode is made of the metal to be plated on the part. Both components are immersed in a solution called an electrolyte containing one or more dissolved metal salts as well as other ions that permit the flow of electricity. A rectifier supplies a direct current to the anode, oxidizing the metal molecules that comprise it and allowing them to dissolve in the solution.

Zinc metal has a number of characteristics which make it well-suited for use as a coating for protecting iron and steel products from corrosion. Its excellent corrosion resistance in most environments accounts for its successful use as a protective coating on a variety of products and in many exposure conditions. The excellent field performance of zinc coatings results from their ability to form dense, adherent corrosion product films and a rate of corrosion considerably below ferrous materials, some 10 to 100 times slower, depending upon the environment. While a fresh zinc surface is quite reactive when exposed to the atmosphere, a thin film of corrosion products develops rapidly, greatly reducing the rate of further corrosion.

This is also called zinc coating, but applied in a cold, electrolytic bath rather than a molten zinc bath. Traditionally the plating/coatings are thinner than hot dipped and not suitable for extended outdoor exposure. In this process a layer of pure zinc is applied. The thickness of plating ranges from a few microns on cheap hardware components to 15 microns or more on good-quality fasteners. Technical and cost issues prevent the economical plating of components with heavier coatings.

These thin electroplated coatings could very well be damaged or removed, under impact.

To get the most definitive answer to Vincent’s question, I went to the experts – Maze Nails (some earlier kudos for Maze Nails can be found here: https://www.hansenpolebuildings.com/2016/01/pressure-treatment-beyond-cca/)

Maze Nails president, Roelif Loveland responded to my question almost immediately, “We are not aware of any damage caused to the Double Hot-Dip Galvanized coating on our Maze Post and Framing nails due to the use of titanium hammers.  The zinc is tightly “welded” onto the nails in our Maze type of coating – so it does not chip off the way galvanizing can on cheap nails.”

Moral of the story – use hot dipped galvanized nails!

P.S. (from Roelif) I should mention waffle faced hammers, however, can be pretty destructive to zinc coatings – and should be avoided when driving galvanized nails.  They are like using a meat tenderizer on the nail head – and can beat up the zinc pretty badly.  Smooth faced hammers are best for this application.