I read lots of different forums. A poster on one of the board recently wrote:

“I have a quick question concerning nails. I just had a builder build me a pole barn and was wondering about the nails. They used galvanized nails for the skirt board on the bottom but then on the 2×4 strapping they used common nails. Is this acceptable? Or won’t the pressure treat corrode the nails that were shot into the 2×4 strapping?”

My answer was pretty simple:

Per IBC (International Building Code) Section 2304.9.5 fasteners in preservative-treated and fire-retardant-treated wood shall be of hot dipped zinc-coated galvanized steel, stainless steel, silicon bronze or copper. The coating weights for zinc-coated fasteners shall be in accordance with ASTM (American Society for Testing and Materials) A 153. 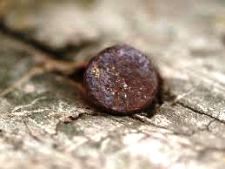 Even electroplated galvanized nails, which were the predominant fasteners used with CCA (Chromated Copper Arsenate) pressure treated lumber, are not acceptable for use with ACQ (Alkaline Copper Quaternary) and CBA (Copper Boron Azole) pressure treated lumber. The zinc content in the coating of these nails is insufficient for long-term resistance to the corrosive action by the chemistry of some of the new treatments.

The 2×4 “strapping” referenced are 2×4 “barn style” wall girts, which attach to the wall columns and support the siding.

In the event the builder was selling his services as providing a “building code compliant” building or the building required a building permit – the building owner would most certainly have a cause of action against the builder. To my humble opinion – it at least would involve a massive rework on the part of the builder, as all of the siding would need to be removed, in order to fix the problem.

If a building permit was required, shame on the Building Inspector for letting such an obvious violation of the code occur.

Outside of the potential for chemical reaction issues with pressure treated lumber, I’ve always advocated for the use of galvanized nails for all pole building connections. If “brite” nails are used, and the nails are rained on, unsightly rust streaks form on exposed framing members.

For the few dollars the builder above has put in his own pocket, he has risked a possible catastrophic building failure….and if the building were to fail and someone was injured or worse, the builder could easily be criminally liable!