For those who are not insulating the sidewalls of their pole buildings and are looking for a low cost alternative to windows for getting daylighting into their buildings – polycarbonate eave lights might very well be the answer.

I’ve written about them in the past (see: https://www.hansenpolebuildings.com/blog/2011/09/polycarbonate-eavelights-light-up-my-life/), so I won’t expound so much upon their benefits, as much as keeping those who install them from being disappointed. 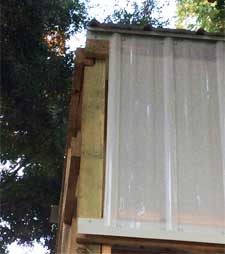 As one might expect – steel panels and polycarbonate eave lights expand and contract at different rates. Hence the use of a “z” flashing between the two in sidewall installations (or at least for those who, in my humble opinion, do it right).

The natural inclination is to place the panels into what “feels” like a tight overlap.

While us listeners of what is now “oldies” music, remember “Hooked on a Feeling” as the 1974 Billboard #1 hit by the Swedish cover band “Blue Swede”, being hooked on a feeling when installing polycarbonate panels can get you in trouble.

Shown in the photo is the 12th of the 36 inch net coverage panels on the sidewall of a 36 foot long building. The last panel falls about four inches shy of the corner of the building – not the ideal landing point.

In order to make sure adequate coverage of the panels occurs (as well as not needing more materials), the best solution is to measure the distance between overlaps of each successive panel. Any answer other than the 36 inch width of the panel is the incorrect one.

In this case, the eave lights should be screwed down first closest to the previously installed panel, then “pulled” until the panel’s full three foot wide coverage is achieved. If the measure is greater than the three feet, push the leading edge of the panel in the direction of the first installed screw until the three foot point is reached, then place the screws in the proper position closest to the leading edge.

For those trivia buffs – “Hooked on a Feeling” was originally recorded in 1968 by B.J. Thomas, but the famous “ooga-chaka ooga-chaka” background can be credited to British pop eccentric Jonathan King!