My lovely bride speaks of her mother telling stories of the “Dirty Thirties” in Minnesota and the Dakotas.

The Dust Bowl, also known as the Dirty Thirties, was a period of severe dust storms which greatly damaged the ecology and agriculture of the American and Canadian prairies during the 1930s; severe drought and a failure to apply dryland farming methods to prevent wind erosion caused the phenomenon. The drought came in three waves, 1934, 1936, and 1939–1940, but some regions of the high plains experienced drought conditions for as many as eight years With insufficient understanding of the ecology of the plains, farmers had conducted extensive deep plowing of the virgin topsoil of the Great Plains during the previous decade; this had displaced the native, deep-rooted grasses which normally trapped soil and moisture even during periods of drought and high winds. The rapid mechanization of farm equipment, especially small gasoline tractors, and widespread use of the combine harvester contributed to farmers’ decisions to convert arid grassland (much of which received no more than 10 inches of precipitation per year) to cultivated cropland.

During the drought of the 1930s, the unanchored soil turned to dust, which the prevailing winds blew away in huge clouds which sometimes blackened the sky. These choking billows of dust – named “black blizzards” or “black rollers” – traveled cross country, reaching as far as the East Coast and striking such cities as New York City and Washington, D.C. On the Plains, they often reduced visibility to a yard or less.

As a result, Congress declared soil and water conservation a national priority and the concept of local Soil and Water Conservation Districts was born. The second of these districts created in New York State happened to be in Yates County. 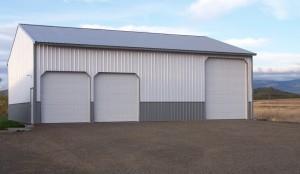 Yates County Soil and Water is constructing a pole (post frame) building at the Horizon Business Park to store some of the organization’s equipment. Steve Griffin, CEO of the Finger Lakes Economic Development Center, says the building will occupy a small strip of land on the south side of the lot which wasn’t feasible for other business uses.

Post frame construction makes for the perfect design solution for the needs of Soil and Water Conservation Districts, not only for equipment storage, but also for office space. Post frame buildings are Building Code conforming and can be constructed both economically and quickly. The savings of taxpayer dollars is readily noticed in the ballot boxes.

For governmental agencies, such as the Yates County Soil and Water District, who have building projects which must go out for bid – Hansen Pole Buildings offers to provide the engineer sealed structural plans needed for the building itself, at no cost to the municipality! This creates even further savings to taxpayers.