When my lovely bride and I had our post frame building home constructed, energy efficiency was important for us. At the time Hansen Pole Buildings was ordering our overhead doors through my friend David Vance, owner of Rainer Building Products in Western Washington. I approached David with our needs for doors and he recommended C.H.I. doors with an advertised R value of 17.19 for an 1-7/8” thick polyurethane insulated door.

Advertised R-values are inaccurate, irrelevant — or both

To determine the thermal performance of a garage door, you need to know two things:

The door’s leakiness, and

The R-value or U-factor of the entire door assembly. 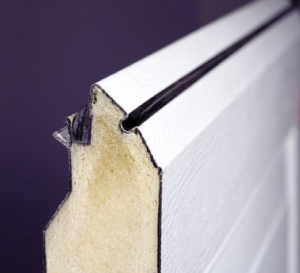 The R-values which are claimed by garage-door manufacturers are measured at the center of one of the door panels. Apparently no manufacturer reports the R-value of the entire door assembly (including the panel edges, the seams between panels, and the perimeter of the door) in their promotional materials. Moreover, manufacturers’ reported R-values tell us nothing about air leakage.

Most garage-door manufacturers are reluctant to share actual laboratory reports showing the results of R-value testing.

“For marketing purposes, the garage door people get a measurement on the center of panel,” said David Yarbrough, a research engineer and insulation expert at R&D Services in Cookeville, Tennessee. “The overall R-value of the entire door might be quite a bit less — in extreme cases, it may be half — of the R-value of the center of the panel. Not everyone approves of this kind of marketing. It’s been a hot debate in recent years.”

In fact, the percentage turns out to be much less than half.

Clopay provided test results for their model 3720 five-panel garage door. According to Mischel Schonberg, Clopay’s public relations manager, the door is insulated with two inches of polyurethane foam. Schonberg wrote, “This model is the commercial version of our residential model 9200 and has the same construction.”

While Clopay advertises the 9200 door is R-17.2 — presumably, a claim based on a center-of-panel measurement — the test report for the installed door shows R-6.14.

While Overhead Door advertises their model 494/495 Thermacore door has an R-value of 17.5 — a claim which, like competitors’ claims, is presumably based on a center-of-panel measurement — the test report for the installed door shows a U-factor of 0.16, equivalent to R-6.25.

Based on the only two test reports Martin was able to track down, it seems logical to conclude the R-value of a garage door is about one-third of the R-value claimed in a manufacturer’s brochure.

All over the map

Mike Thoman, the director of thermal testing and simulation at Architectural Testing Incorporated, a Pennsylvania laboratory, has tested many garage doors.

“The assembly R-values are not going to be nearly as good as the R-value of the material would indicate,” Thoman told Holladay. “When you compare the assembly R-value to the material R-value, the percentages are all over the map. The percentage is a function of how the joints in the panels are made, and whether any attempt was made to provide for thermal breaks at panel edges — a lot of different things. Some products have a lot of insulation in the panel but have everything else wrong. We’ve also seen doors that do everything right. There’s really a wide, wide range.”

Come back tomorrow for Part II in the discussion of R-values in overhead doors.