I deal directly with very few clients as a Building Designer – just enough to be able to make sure things are flowing through our system as I expect they will.

I’ve truly been enjoying my recent interactions with a client who took the time to really share with me what his needs were and allowed me to custom design for him buildings (two) as if they were going to be for me. The larger of these buildings (30’ x 60’) is going to be an addition to his home. His original idea was to have a concrete floor in the building. We discussed the long term comfort of a wood floor over a crawl space, rather than “living” on concrete – the elevated wood floor won! 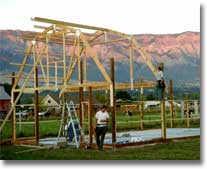 One thing my client did need is a builder, he is a busy business professional and just does not have the time to do his own work. I did some quick research and came up with about a dozen builders in his area, who are willing to provide construction services for 50% of the cost of materials or less.

So we are down to ordering time…..today’s email from the client:

“Mike – everything looks good!  My big concern now is being sure I have a worthy Installer/ builder.  If I am going to be completely honest… I do not have a lot of faith in builders in this area.  We do have several Amish and Mennonite families in the area that install / construct these buildings… and have a great reputation, but the other guys are quite scary.  I would feel much more comfortable knowing I have a builder set up before paying for these building in full.  If you remember… I had originally quoted these buildings with you and searched for a builder myself… I had no luck finding someone I felt comfortable with.

To which I responded:

Having been a builder myself for a decade (I ran 35 crews in 6 states), and being the son and grandson of builders, I can give this advice:

Any builder you talk to is going to give only good references, face it, it is a reality. If you go to see their work, they are only going to show you good projects. It proves nothing.

I’ve dealt with the Amish before – in general they do not follow plans or instructions and when things go wrong it is everyone else’s fault. (A little Amish story here: https://www.hansenpolebuildings.com/blog/2014/11/barn-raising/)

Regardless of who you hire – keep control of the situation, never pay out more than the work which has been successfully completed, and pay in increments:

No more than 10% when holes are dug and pass inspection (I actually prefer this after posts are set);
No more than a total of 1/3rd when everything is framed up;
Up to 90% when final inspection is passed and any “punch list” has been completed;
Balance of 10% 30 days after completion – provided any workmanship issues are completed.

Do not do anything without a written agreement which fully spells out the responsibilities of both parties. You can ADD some of your own stipulations, such as….

Things I object to – crews throwing out their trash on my site, bringing their pets, borrowing my tools.

Even the scariest of builders can perform well, when you keep control of the situation. You can also require a performance bond, although you might have to agree to pay a bit more for a builder as they are not free: https://www.hansenpolebuildings.com/blog/2012/07/contractor-bonding/ 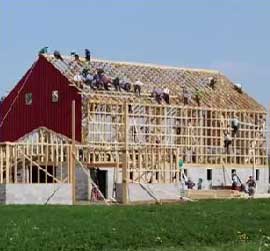