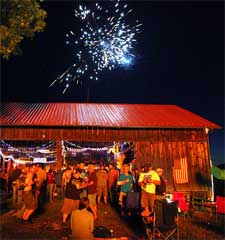 Fireworks by the family pole building

The Fourth of July means lots of things, to lots of different people in the United States. For many, it is the holiest of fireworks oriented days off from work. For others, it means working while everyone else plays.

In doing research for this blog, I was inspired by material written by Fenzel (he is a writer from Cambridge, MA). He was writing about the movie Independence Day and its lots of small and solitary scenes:

The rugged individualism of the American spirit is what evolved the modern pole building concept. During World War II, determined to hold wartime public spending to a minimum, the United States government placed a $1500 ceiling on what could be spent on a new barn.

As much as apple pie, the barn had become a staple in the fabric of rural Americana. The ingenuity which had fueled American innovation was not absent in finding solutions to this dilemma. Working from the concepts originated during the Great Depression, by pioneers such as Howard Doane and Bernon Perkins, these rural heroes arrived at a solution.

By utilizing the concepts of pole building construction, the materials required to build a pole barn were reduced by an amazing two thirds! Besides being material and cost efficient, pole buildings have also been proven to be tremendously resistant to climactic loads, such as wind and snow.

Over the last few generations, pole barns have evolved from being just economical farm buildings, to being utilized for a plethora of solutions. Now, after you are done enjoying your holiday, it is very possible your “toys” (the RV, camper, boat, jet ski or motorcycle), will be parked back in your own pole building, when you return to work on Tuesday. Happy 4th Everyone!