I was a really great son-in-law.

Now, gentle reader, you might ask what this has to do with cellulose post frame attic insulation?

Back in 1981 I lived in a rental with my young wife and our two small children in Salem, Oregon. My wife’s parents wanted to move from Portland, in order to be closer to their daughter and grandchildren, however they did not have home loan credit worthiness.


Growing up, my maternal grandparents had a lake cabin outside of Spokane, Washington. Two cabins West of them, a family with three boys had a cabin. As luck would have it, one of these three boys ended up being my banker in Salem!

Yes – we live in an extremely small world.

Anyhow, early 80’s had a plethora of banks repossessing homes due to defaults on very high interest rate home loans and near 9% unemployment. My banker friend alerted me to a “repo” prospect – three bedrooms, two bathrooms, oversized two car garage, corner lot in a nice neighborhood. An ideal fit for my in-laws and bank would give me a far below market interest rate with only five percent down.

Even though I had never owned my own home, I bought it, moved my in-laws in and rented it to them at enough to cover costs.

Moving forward, not long after our five-year-old son died from cystic fibrosis in 1983 my wife and I went our own ways. As her parents were in the above mentioned home, she was awarded it in our divorce.

Two years later, my banker reached out to me. Turned out my ex had been pocketing her parent’s rent money and not making house payments. Of course, my name was still on this loan. I ended up making up all back payments and the house was then mine, again.

I kept it as a rental until I was preparing to move from Salem back to Spokane in 1989. My buyer was using a VA (Veterans Administration) loan and an inspector from VA required cellulose attic insulation to be removed and replaced with blown fiberglass! It wasn’t cheap, but needed to be done as I wanted to “Get Out of Dodge”. 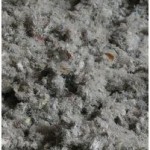 Cellulose is “green.” It’s made of 80% post-consumer recycled newsprint. Paper fiber is chemically treated with non-toxic borate compounds (20% by weight) to resist fire, insects and mold. Cellulose Insulation Manufacturers Association (CIMA) claims insulating a 1500 square foot house with cellulose will recycle as much newspaper as an individual will consume in 40 years. If all new homes were insulated with cellulose this would remove 3.2 million newsprint tons from our nation’s waste stream each year. There’s room to grow. Fewer than 10% of homes built today use cellulose. Cellulose earns “green” points because it requires less energy than fiberglass to manufacture. Disciples claim 200 times less petro-energy than fiberglass. More realistically, Environmental Building News reports fiberglass requires approximately eight times more energy to make when adjusted to reflect energy cost per installed R-value unit.

Cellulose insulation is safe. It is made of paper, but chemical treatment provides it with permanent fire resistance. There’s been static generated by the fiberglass industry warning that cellulose could burn. But independent testing confirms it’s safe and cellulose is approved by all building codes. In fact, many professionals consider cellulose to be more fire-safe than fiberglass. This claim rests on cellulose fibers being more tightly packed, effectively choking wall cavities of combustion air, preventing fire spread through framing cavities.

Any sort of wet insulation is bad. But cellulose is hygroscopic. It’s able to soak and hold liquid water. Undetected leaks can wet cellulose causing it to sag within framing cavities. Water leaks can compress fiber blanket and in extreme cases, can create a void space, degrading its thermal value. Another concern is chemicals used to protect cellulose from fire make it potentially corrosive in wet environments. Oak Ridge National Laboratory tests show chemical treatments used to treat cellulose can cause metal fasteners, plumbing pipes and electrical wires to corrode if left in contact with wet, treated cellulose insulation for extended time periods.

These testing results should be used as cautionary in considering cellulose over steel liner panel ceilings in post frame buildings. My recommendation would be to use fiberglass insulation when in combination with steel liner panels.