Home >> Insulation >> Our Builder Has a Few Questions

I was a first group member (although willing to learn) and frankly lost my posterior financially erecting my first ‘pole barn’ because I had such a difficult time wrapping my head around left-to-right rather than up-and-down. I got my head on straight for building my second one and actually made $100 an hour back in 1980 erecting it!

For this second group, post frame home building takes in an entire new toolbox of concepts. Energy efficiency and ventilation concerns must be addressed, as well as a different set of efficiencies of material use. It is no longer just a ‘pole barn’  and requires a far greater degree of precision – it isn’t necessarily more difficult, but does take more thought.

We’re really excited that we’re closing in on a final exterior design and starting to focus on the ‘fun stuff’ inside.

We shared the renderings and quote with our builder to keep him in the loop and he had some questions I wanted to share with you.

I’ve read your blogs and understand the argument for the truss arrangement that Hansen prefers. Trust me, I see the logic. That being said, he’s definitely one of those ‘trusses on 2′ centers’ kind of guys.

I explained all of the blog-based talking points on why it’s ‘better’. He was concerned that the material cost may be less, but the labor time would be significantly more to fill in between those spans with 2x10s, etc.

Furthermore, he usually covers the roof in OSB sheathing before putting on the metal. Is that included in this quote? Or is that something extra? He’s concerned about the logistics of applying the OSB with such wide spans between trusses. And in a similar vein, with drywall going on the full underside of all scissor trusses, he’s concerned about the additional lumber and labor needs to provide adequate hangers for sheetrock, etc.

And on top of that, he’s concerned about the lack of ventilation in the roof. I was under the impression that spray foam right onto the underside of the OSB for the entire roof was a best practice. He’s thinking we need baffles or something to allow airflow so as not to compromise the OSB over time.

So basically, a lot of questions on the construction logistics as it pertains to trusses and roof. Why not just run 31 scissor trusses on 24″ centers the length of the building and call it good? And how best to handle ventilation.

One comment he offered several times was that he understands the logic behind this construction style for a garage or storage building, but for a home with heat and sheetrock, etc. he thought this would be creating some obstacles for us.

If this is best answered via email, I’m happy to run middleman or add him as a CC on the answers. He also asked if Mike or someone from Hansen would be willing to talk to him on the phone? He’s open to the process, but wants to make sure he understands exactly what the construction process looks like. He said he would love to see a sample cross section or blueprint, but we both understand those are kept secret until we pay. He wants to wrap his head around it all.

One other concern was about wall framing. Some of the videos show horizontal studs as opposed to vertical. He wasn’t sure if that was always the case or if that is specific instances. Again, he’s a vertical stud kind of guy, but wants to understand if he can change that orientation or if it’s non-negotiable. 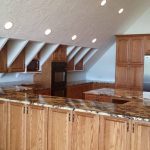 When it comes to truss space/between truss framing/wall framing, he’s definitely concerned about drywall logistics, OSB logistics (or not), moisture, and labor. And I want to make sure he feels heard and informed before we dump these plans and materials on his plate. I see both sides, but at the end of the day, he’s our builder and I need him to be fully on board before pulling the trigger. Could you help? I’m sure I’m not the first person with this quandary but I’ve also used enough pole barn builders in our area to know that he’s our best option for this project.

Thank you so much.

I see this dialogue as a parallel conversation to the design process. We’re forging ahead with design and working on our window and door placements this weekend.

Please tune in tomorrow for answers to Brian’s builder’s questions.

Silverwood Pole Buildings
This article by Brian Walker appeared on CDAPress....
Calculating Stairs Rise and Run
What is Wrong With this Picture? Stairs, they see...
When the Loft Design Seems Inadequate
One of the great things about post frame (pole) bu...