Expansive soils in many United States areas pose a significant hazard to foundations for barndominiums. Swelling clays derived from residual soils can exert uplift pressures of as much as 5,500 PSF (pounds per square foot) and can do considerable damage to barndominiums, shouses and post frame homes.

Expansive soils owe their characteristics to swelling clay minerals being present. As they get wet, clay minerals absorb water molecules and expand; conversely, as they dry they shrink, leaving large soil voids. Swelling clays can control behaviors of virtually any type of soil if the percentage of clay is more than about five percent by weight.

Soils with smectite clay minerals, such as montmorillonite, exhibit most profound swelling properties. In real life, expansive clay soils can be easily recognized in dry seasons by deep cracks, in roughly polygonal patterns, in ground surfaces. This zone of seasonal moisture content fluctuation can extend from three to forty feet deep. This creates cyclic shrink/swell behavior in upper portions of soil and cracks can extend to much greater depths than imagined by most engineers.

The most obvious way expansive soils can damage foundations is by uplift as they swell with moisture increases. Swelling soils lift up and crack continuous strip footings (as in typical stick frame construction), and frequently cause distress in floor slabs. Because of different building loads on different portions of a structure’s foundation, resultant uplift will vary in different areas. Exterior corners of a uniformly-loaded rectangular slab foundation will only exert about one-fourth of normal pressure on a swelling soil as compared to central slab portions. As a result, corners tend to be lifted up relative to the central portion. This phenomenon can be exacerbated by moisture differentials within soils at slab edges. Such differential foundation movement can also cause distress to a structure’s framing.

Drilled pier foundations (like isolated widely spaced post frame building embedded columns) have been used in California, Colorado and Texas since the late 1950s to reduce expansive soil damage. However, these types of foundations can also be adversely affected by expansive soil behavior if piers are not sufficiently deep. 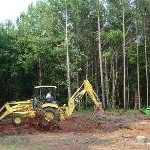 When the rainy season begins, piers are still supported by soil friction. When it begins to rain, water enters deep into soil through cracks. After five to 10 large storms, soil swells, lifting buildings and piers. In the dry season, groundwater table falls and soil dries and contracts. As tension cracks grow around piers, skin friction is reduced and effective soil stress increases (due to drying). When building loads exceed remaining skin friction, or effective soil stress increases to an all-time high, adhesion is broken by this straining, and piers sink. Frequently, corner piers of a pier-supported structure are lifted up during swelling in wet season, and then break their skin friction bond with ground when soil shrinks away from the pier in following dry seasons. Loss of this “skin friction” decreases the pier’s ability to support building loads. This straining to soil can become great enough to cause pier failure. To prevent this style of damage, piers must be drilled well below the zone of seasonal moisture fluctuation, and they must be designed with an assumption upper pier portions will lose contact with adjacent soil.

Expansive soils pose greatest hazard in regions with pronounced wet and dry seasons. This annual cycle of wetting and drying causes soils to shrink and swell each year. Thus, arid regions are much more susceptible to damage from expansive soils than regions maintaining moist soil conditions year around. Biggest problem in expansive soil areas is differential water content. Sources of water in developed areas are not limited to temporal weather cycles, but can be introduced by people. A frequent source of damage is differential swelling caused by pockets of moist soil adjacent to dry soil. For example, lawn and garden watering creates a moist zone on foundation exterior, whereas interior is dry; this creates differential swelling pressure on foundation elements. There is frequently a moisture differential between soils beneath a house and those more directly exposed to changes in the weather.

Best way to avoid damage from expansive soils is to extend building foundations beneath zones of water content fluctuation. This is twofold: first, to provide for sufficient skin friction adhesion below the zone of drying; and, second, to resist upward movement when surface soils become wet and begin to swell. Successive drought years have demonstrated this zone of seasonal fluctuation can extend much deeper than previously believed. Piers extending to depths of six feet can withstand normal annual fluctuations, but do not appear adequate when taken over long hauls, such as a two-year drought followed by an extremely wet year. Another way of mitigating expansive soil problems is to collect surface runoff and to limit surface infiltration during rainy winter months.

Expansive soils cause major damage to light foundations and associated structures. However, engineers have an ability to recognize swelling clay soils and to design structures able to withstand their effects. Enlightened design of deep foundations (where depth of columns is five times or more than footing diameters), and effective drainage of landscape irrigation and swimming pool leakage could dramatically reduce damage to new barndominiums.