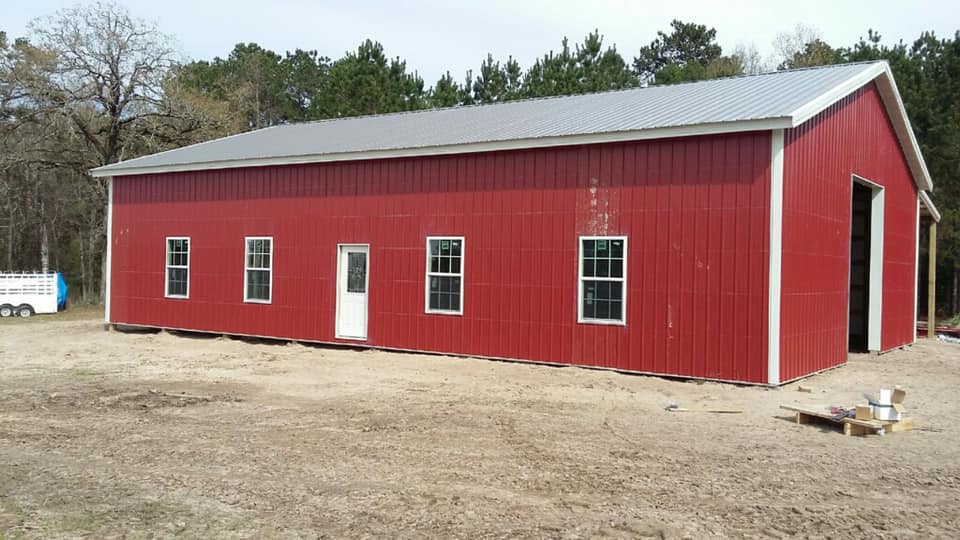 Disclaimer – not a photo of a Hansen Pole Building

As kids, we grew up as the last house before the street surface changed from asphalt paving to dirt. Unlike today’s children, whose parents can buy “sidewalk chalk” in a myriad of colors, we improvised.

Whenever a new home was being drywalled near us, we would scrounge for scraps of sheetrock. As creative children of five and six years old, we’d use edges of these scrap pieces to outline chalk “roads” on our street’s pavement.

Doing this manually was tedious as well as tough on our little backs, so we took things a step further. My red Radio Flyer® wagon was hitched to behind my friend Danny’s older brother’s bike. Now this Radio Flyer® was designed for lots of things, however where we were going with this experiment, was probably none of those.

I’d lay down in my Radio Flyer®’s bed on my tummy, facing rearwards. Firmly held in each hand was a piece of sheetrock scrap. With the bike’s propulsion, we could produce (what to us anyhow) seemed like miles of chalk roads in no time at all.

Growing up in a family where my Dad and Uncles were framing contractors, we found out chalk had uses other than for making “roads”.

Developed in ancient Egypt (think pyramids) “chalk boxes” are used by carpenters to mark long, straight lines on relatively flat surfaces, much farther than is practical by hand or with a straight edge. A chalk box draws a straight line by action of a taut cotton or similar string, coated with colored chalk (most often blue or red, but other colors such as yellow, white and fluorescent orange are available).

A chalk box string is laid across the surface to be marked, pulled taut, then snapped sharply, causing the string to strike the surface leaving behind a straight chalk line where the surface has been struck.

We sadly now live in an overly litigious society, so chalk box packages read like a television pharmaceutical commercial, “WARNING: TO AVOID RISK OF INJURY ALWAYS WEAR SAFETY GLASSES AND OTHER APPROPRIATE SAFETY ITEMS FOR PROTECTION. FAILURE TO DO SO CAN RESULT IN BODILY INJURY.” There might be only one thing more embarrassing than being launched from a Radio Flyer®, would be to incur a debilitating chalk box accident.

When it comes to using a chalk near steel roofing and siding, this following warning should have been added:

P.S. See the steel siding below the entry door? Not only did this builder make more work for himself (extra cutting and trim work), he also has created a situation where any concrete apron outside this door will have to be poured against steel siding (or be uncomfortably low).