When a Contractor Ignores Building Plans

I realize this may come as a surprise, but there are more than a few times I have discovered building contractors have made errors in building assembly due to failure to examine the provided building plans.

Our client STEVE in HINES writes:

“Good morning, my building is framed, sided and roofed. However, yesterday we discovered that the sidewalls girts should have been 2x 8’s but 2×6’s were used instead (same as the endwalls). I know this is my problem to fix, but before I tell the contractor, I’d like to know if you have ever heard of this happening and if so, what they had to do to fix the problem. As it stands, it definitely does not meet wind code anymore. I’m not asking for a fix, but only some direction as where to start pursuing one. Could very well become a messy job! 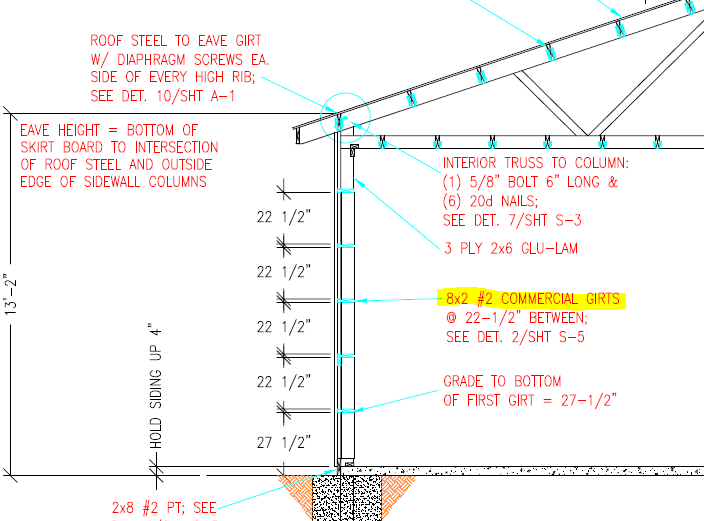 Well, to begin with, I was a post frame building contractor in a past life. At times we had as many as 35 crews erecting buildings in six states. Most of these crews were very, very good. Some of them were not quite as good. Overall this mix did give me an interesting perspective – if something could be done wrong, one of my crews figured out how to do it. Along with this, chances are I have had to come up with a fix for these unexpected challenges.

In Steve’s case, actual reasoning for 2×8 sidewall girts was so his building could have a flush interior surface to drywall – known as commercial girts. (Learn about commercial wall girts here: https://www.hansenpolebuildings.com/2011/09/commercial-girts-what-are-they/)

Our curiosity question was – what did the builder do with the 2×8 material supplied for girts? It turns out client had a pile of 2×8 left over when the pole building was completed. They ran short of 2×6, so building owner just assumed someone had stolen them and more were purchased!

Anyhow – there are several possible fixes. 2x4x12′ could be ripped and nailed along length of  2×6 installed where 2×8 should have been, or 2×4 could be placed vertically (3-1/2″ face against girt inside face) every two feet’ to provide a surface to attach drywall. Whichever choice is decided upon, a revision should be done to plans and sealed by Engineer of Record to verify adequacy.

2 thoughts on “When a Contractor Ignores Building Plans”