Why Not Use T Girts?

Last August one of our clients in Colorado invested in a new Hansen Pole Buildings Monitor style building. One of the features of the building was for it to be drywall ready. The
typical method we use for this is what we refer to as “commercial” girts – basically they are bookshelf style girts, set 24 inches on center, sized to match the columns and it includes a pressure preservative treated mudsill to set on top of the concrete floor, as well as the necessary backing at the top of the wall to support drywall.
For more reading on commercial girts: https://www.hansenpolebuildings.com/2011/09/commercial-girts-what-are-they/

This particular client is in an area where the design wind speed is 115 mph (miles per hour) and this particular site has an Exposure C.
Learn everything you ever wanted to know about wind exposure and then some here: https://www.hansenpolebuildings.com/2012/03/wind-exposure-confusion/
It turns out or client hired a perhaps less than qualified builder to construct his building, and along the way had to dismiss him and find a replacement builder.
Keep in mind, the modern Hansen Pole Building is the result of input from people who have collectively constructed hundreds of thousands of buildings. Our team here is always “ears open” to ideas which make for a better building, without adding astronomically to the investment.
This is part of the culture of delivering the “Ultimate Post Frame Building Experience™”.
New builder made this suggestion:
“If you are open to suggestions, the next time you sell a building such as this and the buyer wants to finish the inside, use 2×6 wall girts laying flat in between the post and a 2×6 wall girts attached to the outside of the post , nail them together in the shape of a T. It would cost less, be stronger, easier and faster to build.”
Let’s see if new builder is correct in his recommendation.
On this particular building, the sidewall columns are 3 ply 2×8, which requires a 2×10 commercial girt. To make builder’s suggestion work, it would take a 2×6 on the outside of the column and a 2×8 placed bookshelf style.
For sake of pricing discussion, I have used numbers from the closest The Home Depot® to the client, which is in Colorado Springs. Our version (the 2×10 10 feet long) weighs in at $10.93. The builder’s version (a 2×6 and a 2×8 10 feet long) come in at $6.37 and $8.46 for a total of $14.83, so certainly not less expensive in the materials portion.
Looks to me like the builder’s less expensive version comes in at over 35% more expensive!
How about strength? 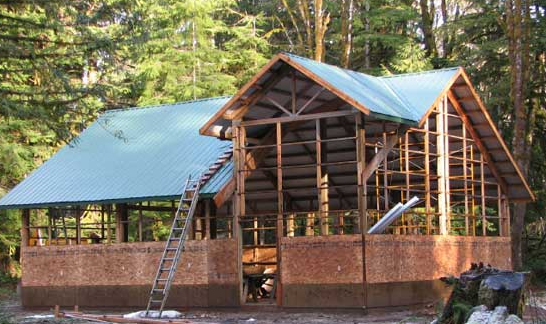 The combined 2×6/2×8 mix has a Section Modulus of 15.203. while the single 2×10 is 21.3906. Now the combined mix gets to use a base Fb (Fiberstress in bending) value of 1020, the 2×10 only comes in at 935. Doing the math the combined method is 15.203 X 1020 = 15,507 in-lb, the single 2×10 21.3906 X 935 = 20,000 in-lb.
Hmmmm – the building as designed would have wall girts nearly 29% stronger than the builder’s “stronger” method.
How about easier and faster to build?
Well, it now involves having to cut two boards and nail them together as a T, rather than cutting and installing a single board. Not seeing how this is faster.
Unless – builder is thinking he will not have to place blocks under each end of the bookshelf girt.
The suction force on the end of each of these wall girts amounts to 258.25 pounds. I don’t know what the builder was planning upon using for nails, but with the recommended 10d common nails, the withdrawl value is somewhere around 37.5 pounds per nail. Factoring in the DOL (Duration of Load) factor for wind, this would amount to having to place 5 nails into an area roughly two inches by five and one half inches.
Could it be done? Maybe, but methinks it will result in a poor result – both cosmetically and structurally.
In addition, with no block under the ends of the 2×8 bookshelf girt it is going to be prone to some twisting issues.
Suggestion appreciated, however the verdict, in this case, is a resounding no.

Foam Closure Strips
Inside Foam Closure Strips to be exact. There are...
Harnessing Radiant Heat
Welcome to Ask the Pole Barn Guru - where you can ...
Pole Building Prices Comparison
“I don’t think you know how we do it up here” We ...