I started snow skiing back in 1963, shortly after my sixth birthday. My dad and uncles were the framing contractors for the first condominium units at Schweitzer Basin, near Sandpoint, Idaho and somehow we ended up with a unit shared with the families of my uncles Lyle and Gil. Uncle Lyle’s wife, my Auntie Joyce ran the ski school, so it was a pretty natural thing for all of us cousins to be strapping boards on our feet on winter weekends.

A little historical trivia about Schweitzer Basin – On a summer morning in 1893, while riding her filly to work at the railroad station, Ella Mae encountered a strange individual, dressed in a well-worn military uniform, standing along the trail at attention, musket at his side. This went on for several days, until one morning, he stepped onto the trail, took Ella Mae’s horse by the reigns and led it down the path about a half mile before letting go and disappearing back into the woods.

Telling her husband and son Earl about the strange occurrence, Earl said it sounded a lot like a friendly old hermit named Schweitzer who lived alone in a small cabin near where he and his friend Harry liked to fish.

Not long afterwards, the man showed up at Ella Mae’s work, and in a thick accent informed her he had come to seek her advice regarding his intention to kill a local settler and take the man’s wife for his own. Ella Mae dissuaded the man from his plan and sent a warning to the settler.

The next morning, Schweitzer came back to the station and told Ella Mae he had changed his plan and instead intended to carry off Ella Mae as she was both younger and prettier than his other intended bride!

The nearest railway agent, in Spokane, was contacted and he arrived the following day with the county sheriff and a doctor from Rathdrum, Idaho. Upon entering Schweitzer’s cabin, the hides of numerous cats were found nailed to the walls and a pot full of cat stew was boiling on the stove – solving the mystery of the disappearance of the pets of the town of Sandpoint.

Schweitzer was hauled off to the “county farm” for observation and later committed to an “insane asylum” as a dangerous and raving lunatic. The mountain above the hermit’s cabin retains his name to this date!

When did skiing begin at Schweitzer Basin? 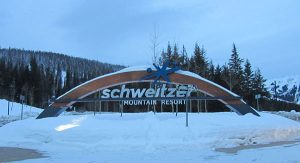 The first skiing in the Schweitzer basin began in 1933, but those intrepid fans did so by hiking to a point, then sliding back to the foot of the mountain, often on wooden slats tied to their boots.

While many might have seen the bowl-shaped potential of Schweitzer as a possible ski haven, the idea of a ski resort came when Dr. Jack Fowler, a Spokane dentist, was returning from a ski outing at Big Mountain Resort in Whitefish, Montana. From Highway 200, Schweitzer looms up clearly, and displays the bowl during mile after mile of the drive. Awed by the beauty of Schweitzer Mountain’s snowy mountaintop, the picture of a premier ski resort came shortly after.

Fowler’s companion on the skiing trip was Grant Groesbech, a Spokane architect (I went to school with Grant’s son Tom as well as his partner Roy Wyatt’s daughter Kelly – who later became an architect on her own). These two, along with Sandpoint businessman Jim Brown, and others, began developing Schweitzer. The partnership was formed, and they went on a mission to secure loans, investing their own money, and raising additional funds from the people of Sandpoint. Fowler generated support with ski enthusiasts, and Groesbeck went to other ski resorts gathering info and knowledge to help with the new Schweitzer Mountain Ski Resort. They pooled their resources to buy the acreage encompassing the bowl, packed in equipment and provisions to establish a base camp at the foot of the basin, and began exploring the slopes to map out future runs.

Construction on the mountain began in 1961 on the ski runs and road up the mountain. The tubular steel towers to support the mile-long double chair were constructed, and electricity was brought up the mountain for the lodge and lift motors. One of the interesting points about Schweitzer is on one of the many runs is a building that skiiers enter on one side and exit onto a quad chair on an adjacent side is…a pole building.

Back on track – at the top of the ridge at Schweitzer Ski Resort, behind our condominium, the wind drifted snow across to form a cornice. One of my dad’s favorites after a day of skiing pursuits was attempting to climb the steep face below the cornices on his 440 Yamaha snowmobile. While valiant efforts were made, the conquest was never realized.

The very same principle applies to buildings in snow country, where the wind pushes the snow from the windward side of the roof up and over the ridge, forming a deep drift on the leeward side. Whilst the modern day Building Code (IBC – International Building Code) addresses this issue, it is most often overlooked by building designers, design professional and builders.

How is this addressed from the standpoint of a design solution? To begin with the footnotes of the roof truss drawings should advise as to unbalanced loading being considered within the design (the drift places a higher load on one side of the truss than the other).

Depending upon the magnitude of the drift, the roof purlins in the drift area may need to be one or more of closer together, of a larger dimension and/or higher grade. This can be relatively easily calculated and is based upon the design snow load and the slope of the roof.

If your new post frame building will be located in snow country, ask your provider if their design incorporates accommodating drift loads – if not, run fast to someone who does.