When last we peeked in on Leroy and the boys on the pole building across the street, our hero and his crew were making slow and steady progress. I’ve figuratively hammered on why “barn style” wall girts generally do not meet the requirements of the Building Codes. The problem is one of deflection and I have probably mentioned more than once the barn girts may very well meet the requirements for bending – meaning they may very well be designed to carry the design wind load and won’t break, they just bend too far!

Leroy’s cohorts had a wall girt fail while under a load.

Always someone to prove me wrong! 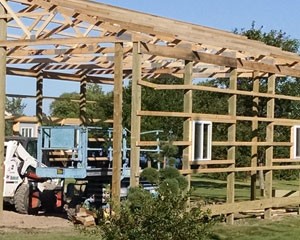 The load, however was not from the wind (as might have been expected), but instead, it was from one of the crew standing in the middle of it!

Wood is unique in the sense that it has the ability to support higher stresses if the loads are being applied for short periods of time. This effect is quantified by the Load Duration factor, or CD for short. This helps greatly for temporary increases in loading (such as an earthquake, wheel load, wind load, etc.) will have additional strength, compared to permanent loading.

So how much concentrated load can a 2×4 1650msr wall girt placed placed as barn girts on the side of a building take?  If you like math – here we go…

The formula for maximum moment (refresh yourself on bending moments here: https://www.hansenpolebuildings.com/2012/09/bending-moment/) is Mmax = P x a x b / L, where P is the applied load in pounds, a and b are the distance from each end to where the load is applied and L is the length squared (all distances in inches). A 200 pound worker standing in the center of the girt would impart 4800 in-lbs (inch pounds) of force upon the eight foot long member!

Moral of the story is a 200 pound worker standing on the top of the now broken 2×4 barn girt should have been able to safely be there for up to 10 minutes, and only have utilized just under 60% of the strength of the board. The caveat being if the nails in each end of the girt were adequate to support the worker’s weight!