In a past life, when I was far younger, I was a newbie in the prefabricated metal connector plated wood truss industry. My first job was as a sawyer, I was the guy who trimmed all of the components prior to their assembly into trusses.

Although my employers had what at the time was a fairly good sized operation, technology had not yet reached us.

In today’s manufacturing process, most cutting is done on specially designed machines with as many as six blades which can precision cut lumber as long as 20 feet, as quickly as it can be fed into the saw! When I began, the saw I was trained on was a radial arm saw with a pivoting table. This allowed for only a single cut to be made at a time.

Bottom chords on triangular pitched trusses most often have a long sloped angle cut at the junction to the truss top chords. At my first job – we sawyers made a single cut, known as a feather cut. Due to slight differences in the crown of the lumber, this taper to an indeterminate point lead to some variability in assembly.

Once I had moved on to the sister plant of my first employers, I convinced the managing partner we would be producing a much improved truss, by using the industry standard “butt” or “Heel” cut at the end of each bottom chord of ¼”. The downside, it would take two cuts on the end of each bottom chord. The plus, more accurate assembly in the shop, and easier installation at the jobsite as framing contractors had an exact and consistent point to work from.

This cut also allowed the framers to position sheathing on the walls so the top edge was even with the top of the wall. The ¼” butt cut allowed the tail of the truss to clear the edge.

When I relocated to Oregon to manage the truss plant at Lucas Plywood and Lumber, I was exposed to an entirely new application of butt cuts. Most wood framed construction there was done with overhangs which were open (no soffits). 2×4 exterior stud walls were framed with a 2×6 double plate, with the extra 2” held to the outside of the wall. The siding would then be installed so it abutted the underside of the 2×6. 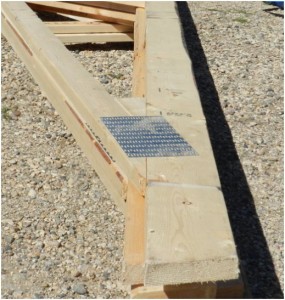 Years later, my brother and I worked as truss designers for a company which built lots of trusses for pole buildings, however did not have any 2×6 lumber graded higher than 1650msr (https://www.hansenpolebuildings.com/blog/2012/12/machine-graded-lumber/).

We found we could manipulate the height of the butt cuts, gradually changing 1/16th inch at a time, to be able to eliminate overstress in truss designs by as much as 10-12%!