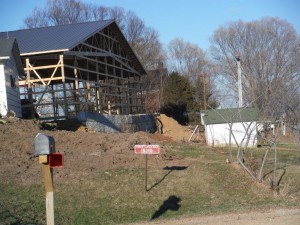 The owners of The Castle Rock Inn chose a pole building to replace the structure, saving months of time by not having to wait for spring in order to excavate and pour the continuous footings and foundations which would have been needed in other forms of construction. While the pole building was sadly not provided by Hansen Pole Buildings, Rick stopped by to take some photos of the new construction. Among the photos might be one of the saddest examples of a retaining wall which I have witnessed.

Retaining walls are built for both functional and aesthetic purposes. A majority of the retaining walls built today are of the type called Segmental Retaining Walls (SRW). A segmental retaining wall is built using interlocking concrete blocks.

For retaining walls over 3 to 4 feet in height, building codes generally require a building permit and structural wall design prepared by a qualified engineer. Independent civil engineers (P.E.) licensed in the state of the project must prepare these final wall designs. Design professionals who aren’t doing the structural engineering of the wall (such as a site civil engineer, architect or landscape architect) can retain a SRW engineer to provide the wall design.

Ecology blocks are often used in SRW systems. These are large concrete blocks, which are manufactured from left-over or unused concrete. Concrete, which in years gone-by would have been dumped and wasted or hauled to a land fill site, is saved and turned into a useful construction product, hence the term Ecology Blocks.

Full ecology blocks weigh approximately 3850 lbs. and the half blocks are 1900 lbs. There is a picking eye of #5 rebar located in the spacing between the tongues in the top of each block. This picking eye is suitable for loading, unloading and for placing the blocks with a crane or backhoe capable of lifting and moving 4000 lbs., in the case of a full block.

Generally the blocks are made in three finished styles; scratched & framed, plain and cobble. The color and appearance of the blocks is fairly random and inconsistent, due to the nature and mix of concrete which is being returned from jobsites.

According to one of the Castle Rock Inn owners, “Our site actually sank a couple of inches so we had to bring in more fill to bring to grade.” Whether the sinking feeling may be attributed to the retaining wall is a decision for the experts to resolve, however it could very well be a suspect.

Have grade change near your future pole building site, which is best solved by a retaining wall? Don’t guess. Invest in a professional engineer to design the wall, then follow their plans!

Insulation: When the Fold Hits the Fan
Greg, one of my blog readers, posted a comment onl...
Turf Sweating, A Post Frame Addition, and A Grow H...
DEAR POLE BARN GURU: Hello, I am from Webster SD a...
Concrete Sealer to Moisture Proof an Existing Conc...
We were at a vendor event for the DirectBuy in Bea...