Most of us have never heard of the Dunning Kruger effect. Although you may not recognize the title, there is a better than fair chance you know one or more people who are affected by it.

Wikipedia defines the Dunning Kruger effect as “a cognitive bias wherein unskilled individuals suffer from illusory superiority, mistakenly rating their ability much higher than is accurate.” In other words, the more ignorant some people are on a particular subject, the more likely they are to think they know more than the best-trained experts. 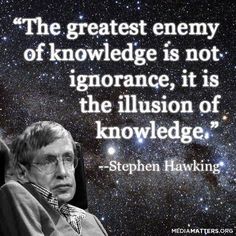 The phenomenon was first tested in a series of experiments published in 1999 by David Dunning and Justin Kruger of the Department of Psychology, Cornell University. The study was inspired by the case of McArthur Wheeler, a man who robbed two banks after covering his face with lemon juice in the mistaken belief, as lemon juice is usable as invisible ink, it would prevent his face from being recorded on surveillance cameras. They noted earlier studies suggested ignorance of standards of performance lies behind a great deal of incorrect self assessments of competence. This pattern was seen in studies of skills as diverse as reading comprehension, operating a motor vehicle, and playing chess or tennis.

Dunning and Kruger proposed, for a given skill, incompetent people will:

fail to recognize their own lack of skill;

fail to recognize genuine skill in others;

fail to recognize the extremity of their inadequacy;

recognize and acknowledge their own previous lack of skill, if they are exposed to training for the skill.

Dunning has since drawn an analogy (“the anosognosia of everyday life”) with a condition in which a person who suffers a physical disability because of brain injury seems unaware of or denies the existence of the disability, even for dramatic impairments such as blindness or paralysis.

When it comes to pole (post frame) buildings and barns, there are numerous instances of this effect. I find them on many information sharing boards, where the information being shared is often so bad it borders on ludicrous.

Moral of the story – take what you read on the internet, or are told by others with a block of salt. While we at Hansen Pole Buildings (and me in particular) don’t know everything, we do know a lot of stuff and are always stretching ourselves to learn more. After over 15,000 buildings I still consider myself a “work in progress” and a good day is when I learn something new