Michael Perry is a Wisconsin author, humorist and intermittent pig farmer. Below I have excerpted from his November 10, 2014 article in the Wisconsin State Journal, “Weather just might call for a torpedo heater”. For more about Michael Perry’s work see www.sneezingcow.com

“Nothing captures the changing seasons like that moment when your cousin the carpenter calls and says he wants his torpedo heater back.

I borrowed the heater deep in the heart of last winter, when the snow atop my pole barns had accumulated to a depth I feared might exceed the load-bearing properties of both structures, to say nothing of the benevolence of my insurance agent. I broke out the roof rake and clawed around the edges, but this amounted to little more than a trim, and day after day the snow continued to fall. I contacted a friend who has a roof-clearing service. He and his partner came out and climbed the roof only to dismount and report that not only was the snow several feet deep, it had compacted and hardened to the point that they simply couldn’t budge it.

Now I was really fretting. I called my brothers Jed and John. They understand things like rafters and physics, whereas I tend to “intuit” things like rafters and physics, which often leads to “surprises” and “disappointment.” Both of my brothers have also built their own pole barns. Yah, they agreed, it had been a heckuva winter, but I probably didn’t need to worry, as my shed had been built by an established company and likely had to meet certain standards. I relaxed for a day or two. Then the forecast began to call for another snow dump, and I was back to fretting. 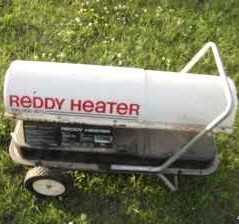 When my buddy Mills told me he had heard of someone running a torpedo heater in a pole barn until the roof warmed and shed the snow, I thought it worth a try. I didn’t own a torpedo heater, but it’s a rare Wisconsin carpenter who doesn’t own one, and so I gave my cousin a call. Sure enough, he had one and was willing to lend it, along with a can of kerosene. I hauled the heater home, fired it up, and the trick worked a treat: after a few hours, the snowpack calved off the roof of each barn like chunks of sheet cake down a playground slide. I was deeply relieved. (And later that week when the snows came and my brother’s pole barn caved in, I tried very hard not to be deeply smug — it didn’t seem the time to tell him I have a sort of intuition for these things.)”

Michael’s brothers Jed and John may understand things like rafters and physics, however they were taking a huge leap of faith with, “….but I probably didn’t need to worry, as my shed had been built by an established company and likely had to meet certain standards.”

Sadly, just because a construction company is established, does not mean they are meeting certain standards. In many portions of the country, pole barns (more technically post frame buildings) are not required to have building permits, or the permit process is so lax it does not require a plan review or field inspections.

Although Michael’s pole barns are in Wisconsin, here is a story about a Minnesota builder which tells the tale about an established builder: https://www.hansenpolebuildings.com/blog/2014/10/ag-buildings/

In snow country? Concerned about a big snow on the roof of a pole building which may or may not be able to support it (if it didn’t require a permit with inspections, you had better be concerned)? Check out the local The Home Depot® or similar retailer who should be able to set you up with a highly rated kerosene torpedo heater for about $200. It is far less than most people’s insurance deductibles.