My loyal readers know I grew up flying small planes (read more about my adventures at https://www.hansenpolebuildings.com/blog/2013/09/hangar-n3407s/).

Growing up in a flying household meant the Wright Brothers were highly revered. I’d always wondered why it is two brothers from Dayton, Ohio ended up making history at Kitty Hawk, North Carolina.

I had my first experience visiting the Outer Banks this past May. It didn’t take me but driving a few blocks down the main drag to figure out why the Wright’s came to Kitty Hawk to fly – they must have loved cheap souvenir T shirts and putt-putt golf!

Seriously, Wilbur and Orville came to Kitty Hawk due to the regular breezes and soft sandy landing surfaces. 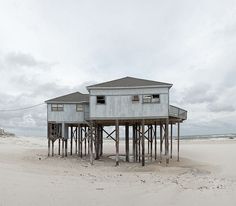 Besides the shirts and miniature golf, there was one characteristic I noticed about many of the houses built along the Grand Banks – they are mostly built on top of platforms which are eight to ten feet off the ground and supported by pressure preservative treated wood columns embedded into the ground.

As I drove through the Kitty Hawk area, I was getting pretty “jazzed” about the whole concept – these are pole buildings!

My new found excitement was dashed, when I found one under construction and saw the treated columns did not extend above the platform.

I had to stop and talk to the builders (and snap a few photos). Asking them about the posts not being the height of the walls and all they could tell me was, “it wasn’t allowed”.

Clearly I was not satisfied with this answer, so I ventured on to the warehouse of all construction knowledge – the Pro Desk at the Kitty Hawk Home Depot. The Pro Associates there at the counter gave me the very same answer, Code would not allow columns to go past the platform.

The entire experience left me with a bad taste in my mouth. I was just not able to let this one sit, so after mulling it around for several months, it was time to go on the offensive!

I posed this question to the three Building Permit issuing jurisdictions in the Kitty Hawk area:

“I was a visitor to your area earlier this year. I noticed homes being built which were platforms on top of pressure preservative treated columns. I stopped to talk to one of the contractors and remarked how (in my simple head) it would be seemingly easier and more structurally sound for the treated columns to be extended all the way up to the roof line, rather than having a hinge point created at the platform. I was told it was “not allowed” by the Building Department. Somehow this response did not seem right, so I am inquiring to see if there exists, in your jurisdiction, some amendment to the Codes which would preclude the use of continuous columns.

Thank you very much for your time and consideration, it is greatly appreciated.”

All three responding nearly immediately! Here are their answers:

Matthew Lowcher, Chief Building Inspector, Town of Kill Devil Hills: “The type of construction method you speak about would be allowed. It just is not a typical type of construction in our area. Engineered sealed plans may be required for such a structure. The Building Code enforced in the State of NC is the NC State Building Code, which is the ICC with NC Amendments. I hope this answered your question.”

My biggest takeaway from this experience is – perception and reality are not always the same thing. Both the builder I spoke with, and the supplier, were thoroughly convinced the method I suggested would not be allowed by the Code!

Orville and Wilbur made things happen which people said could not be done either!

One thought on “Kitty Hawk”