When Your RV Doesn’t Fit

When It Just isn’t Tall Enough

Early in my career supplying pole building kit packages, we provided a building to a client in Oregon for him to house his motor home. Our salesperson really felt he had done due diligence in having the client measure the height of the motorhome before ordering the building.

The motorhome was parked outside.

It seems the client actually did not measure the height of his motorhome, he merely guessed it would fit through a 12 foot tall door!

In a related more recent scenario…. 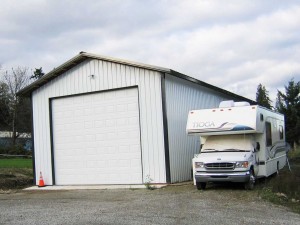 We have a client who is enjoying his 30 foot wide pole building – which has a ten foot wall height. It did everything he wanted it to, until he bought an RV. Which is nearly 12 feet tall.

No matter how well he greases it up, the RV will just not fit into his existing building.

The first suggestion was to put a 12 foot wide side shed on one side, with a very flat roof slope which would extend up to the peak of his existing building. Needing a 12’6” eave height on the low side of the shed, this would result in a slope of only 1.11/12.

Problem – on roof slopes less than 3/12 the steel companies all disclaim any warranty. Bigger problem, the existing building has prefabricated roof trusses, and the extension to run from the existing wall line to the peak of the roof would place a point load on the peak of the trusses, which they are not designed for. Framing (such as a tapered stud wall) could be placed on top of the trusses to support the rafters, but this is just adding to complexity and costs.

Further, the steel siding on one-half of each endwall would need to be replaced with longer panels, as would the wall towards the shed.

My proposed solution, was to first gutter the side of the existing building towards where he wants to park his RV. Then construct a free standing gabled building, as a roof only, immediately adjacent to the gutter. This would prove an immensely less expensive solution.

To confound things further, it turns out the client is in a HOA (Home Owners Association) which limits property owners to one detached accessory building.

I went back to my proverbial “drawing board” and suggested he place siding from the roofline of the new cover, down to the roof of the existing building, allowing just enough gap to allow water to flow into the gutter. This would effectively connect the two roofs into a single structure.

I am waiting to hear if this satisfies the HOA!

Building Over Existing Slab, Blueprints for House,...
This week the Pole Barn Guru answers reader questi...
Overhead Crane
OK, I was web surfing again! My wife thinks I spen...
Post Frame Ramadas
For the uninitiated, here is the definition of ram...

4 thoughts on “When Your RV Doesn’t Fit”