What’s Wrong With This Picture?

When I was a kid, my mom would buy us educational geared books which had various puzzles in them, designed to challenge our minds. One of my favorites was the one where two drawings are shown which are nearly identical, and it is up to the reader to spot the things which do not match from one to the other.

As an adult, I’ve come up with my own version of this game. I call it, “Find what is wrong with this pole building”. My lovely bride cringes whenever I look at completed pole building pictures and gives me a bad time, because I can look at nearly any pole building photo, inside or out, and find something wrong with how it was constructed.

Some of this goes back to when I was a pole building contractor in the 1990’s. I’d check out a fair number of the buildings our crews had constructed, including ones where the clients were totally happy with their new buildings. However I would find things which were either wrong, or not up to my standards for quality – and send the crews back to make repairs. I got a fair number of calls from clients, asking what was happening. They were universally amazed we, as a company, would go to this type of “extreme” effort. 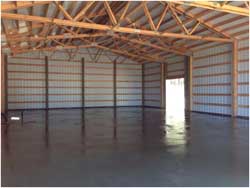 In the photo are several things which are wrong…..ones the average person without engineering skills would probably never catch.

Sidewall columns are spaced every 12 feet. The 2×6 wall girts are flat on the outside of the columns spaced 24 inches on center. They are inadequate to withstand any Code wind loads. (you can read more about girt design here: https://www.hansenpolebuildings.com/blog/2012/03/girts/)

Along with the sidewall columns being spaced 12 foot on center, the trusses are attached directly to the columns. The bracing between the trusses is four rows of single 2×6 on edge. The problem with this is, a single 1-1/2” width member which is unbraced for its length (like the braces shown in the photo) will only span up to 120 inches before it buckles in the weak direction.

The trusses are spaced 5-1/2” apart (on each side of the columns). Even though they are sold as being a “double” truss, the reality is, they are not physically connected, and do not load share. The longer compression webs in these trusses are probably designed to be laterally braced to keep them from buckling, however no truss web bracing is shown in the picture.

The columns on the end of the building stop at the bottom chord of the end truss. The tops of these columns are not braced into the roof diaphragm – this means the columns should have been designed as cantilevered columns, rather than propped columns. They want to act as diving boards!

How good is your critical eye? Notice five small white “dots” on the underside of the roof surface in the area in front of the second pair of trusses in from the rear? While these could be some sort of unusual reflection, my educated guess is one or more of these is caused by a “shiner” – a place where a screw missed the roof purlins and was later removed – leaving a pinhole for light to shine through.

Before you purchase a pole building, try to go look at different styles of pole building construction and use your “critical eye” to discover what looks right…or wrong. And send me photos – I’d be glad to help play my favorite game!