As regular readers know, I’m not a firm believer in the use of precast concrete cookies for footing pads for many reasons.

(for further spirited reading on this very subject: https://www.hansenpolebuildings.com/blog/2012/08/hurl-yourconcrete-cookies/) 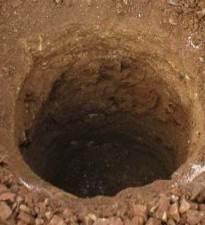 It turns out there are “some” pole building providers who make cookies work on paper, by using an assumed presumptive load-bearing value for the soil of 3000 psf (pounds per square foot).

Chapter of the 2012 IBC (International Building Code) deals with the specifics of Soils and Foundations. With Section 1806 dedicated to Presumptive Load-Bearing Values of Soils.

The presumptive load-bearing values provided in Table 1806.2 shall be used with the allowable stress design load combinations specified in Section 1605.3. The values of vertical foundation pressure and lateral bearing pressure given in Table 1806.2 shall be permitted to be increased by one-third where used with the alternative load combinations of Section 1605.3 that include wind or earthquake loads.

At least in the case of pole buildings designed by the Hansen Pole Buildings engineers, the alternative load combinations are used, so the one-third increase is allowable.

The load-bearing values used in design for supporting soils near the surface shall not exceed the values specified in Table 1806.2 unless data to substantiate the use of higher values are submitted and approved. Where the building official has reason to doubt the classification, strength or compressibility of the soil, the requirements of Section 1803.5.2 shall be satisfied.

“Where the classification, strength or compressibility of the soil is in doubt or where a load-bearing value superior to that specified in this code is claimed, the building official shall be permitted to require that a geotechnical investigation be conducted.”

Returning to our regularly scheduled programming:

So, if the Building Official doesn’t believe the numbers being assumed, he can require (not request) the hiring of a soils engineer to validate the soil strength.

While GW and GP type soils do exist, they most certainly do not predominate. In most instances, 2000 or even 1500 psf soils are much more likely to be the case.

The entire goal is to end up with footings beneath columns which are adequately sized in diameter so the building will not settle under its own weight plus the design snow (or roof) load.

Think of soil strength as being directly the inverse of how easy it is to dig a hole. If it digs easy – the footings are going to be larger in size. If in doubt, play it safe, a few extra yards of pre-mix concrete to increase the diameter of footings, is a small price to pay!