I’ve been buying products from Weyerhaeuser since I got out of college in 1977. Weyerhaeuser has always been cutting edge – coming up with unique ideas and products.

I know I freaked out the owner of the lumber yard where I managed a prefabricated metal connector plated truss plant for, when in 1980 I ordered four semi loads (about 160,000 board feet) of msr (machine stress rated) 2×4 from Weyerhaeuser Canada. It was a great product and about ½ of the price of the green Douglas Fir we had been forced to use.

When customers drove up to the plant, all they could see were units of lumber with Weyerhaeuser wrappers on them – because we ran out of room and had to park them along the road.

In the 1990’s Weyerhaeuser was producing 2x5s (seriously) in British Columbia and I bought truckload after truckload for use in both manufacturing roof trusses as well as for wall girts and roof purlins in pole buildings. 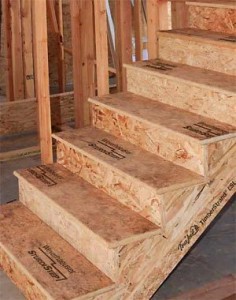 Weyerhaeuser looks to have hit another one out of the ball park with the SturdiStep™.

Stairs in pole buildings usually use two 2x6s for treads. For barns, this might be an adequate solution, however the Weyerhaeuser SturdiStep looks to be a far better end result – especially in pole buildings where interior stairs receive frequent use.

SturdiStep® stair treads are engineered to get the most from natural wood. Each piece is precisely engineered for this end use and is uniform in size, reducing jobsite waste.

The Weyerhaeuser SturdiStep stair treads are manufactured to be flat, straight, and a precise thickness. Knot-free and uniform throughout, they are the only wood treads warranted against delamination, cupping and warping.

The resins used by Weyerhaeuser in the production of SturdiSteps can withstand the demands of normal construction delays, so they can be installed during framing – with no need to expend time and materials for temporary stair treads.