A prospect client in Michigan wrote to tell me pole buildings were, “too expensive, going with a box beam barn instead.”

Two thoughts leaped into my head, first – pole buildings are so efficient it is hard to believe there could be a more economical choice, and secondly – what the heck is a “box beam barn”?

Having grown up in a construction family and spending my entire adult life immersed in building, I am familiar with what a box beam is, but had never heard of the term as applied to a barn.

Unlike a solid beam, a box beam is hollow on the inside. This often means the box beam is not necessarily as sturdy as a solid wood beam.

Creating a box beam is a relatively simple task. Four pieces of lumber are joined to create a box design. The four sides of the box are secured in place using nails (or screws) and wood glue.

While not as strong as a solid wood beam, the box beam does have several practical advantages. One has to do with the weight of the finished beam. Because the box beam is hollow, it is lighter in weight than a solid beam, making it ideal for many situations where a solid beam is not really required.

So what is a “box beam barn”? Well, I broke out trusty “Google” and went on a search. I was able to find one only builder whose claim to fame is the box beam barn.

Imagine, if you will, the inside framework of a typical pole building with trusses placed to align with the sidewall columns every eight, 10 or 12 feet. Now, picture removing the bottom and internal members of the truss, so the only remaining portion is the top chord, or “rafter” portion of the truss. If the mental picture is sounding shaky, I can assure my readers this design (at least as pictured on the builder’s website) is doomed to failure. 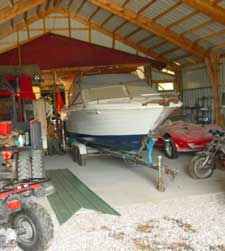 The photo I was looking at (based upon counting the number of roof purlins) appears to be of a building about 40 feet in width. Let’s look at the design solution as if the beam was a solid member, not spliced at the peak with a small and questionable plywood gusset. Using the Code minimum 20 psf (pounds per square foot) as a roof snow load and a minimal dead load of say five psf, a 40 foot span beam would need to support an 8000 pound load.

If one could buy 40 foot long 2x12s, it would take 14 of them sandwiched together to carry the load across this span! Even a commercial grade (2400f) glu-laminated beam would have to be 5-1/8” x 15” in size, fabricated to a strength in bending value which is multiples of times stronger than conventional framing lumber.

My conclusions – there is no way on the planet this “box beam barn” design would ever be sealed by a RDP (Registered Design Professional – architect or engineer). To the prospective client, this is a “buyer beware” scenario. If investing in a building of this design, make sure to buy lots of insurance on the building, and do not let it lapse, as you will be having to make a claim against it.

If you have calculations to prove a box beam barn “works” and how it is less expensive than a traditional pole building – send me the comparison sheet – I’d love to see it!

DIY Kits? Fiberglass Insulation, and Free Quotes
DEAR POLE BARN GURU: Are these DIY kits or do you ...
Ask the Pole Barn Guru: What Size Trusses Do I Nee...
Welcome to Ask the Pole Barn Guru - where you can ...
Low E Barndominium Windows
Being a life-long baseball fan, my first introduct...