When I went off to architecture school at the University of Idaho in 1975, I needed a vehicle which would be a little better suited to the weekly commute from Post Falls to Moscow. My 1964 Datsun pickup (they were really tiny then) had been OK for motoring around town in high school – but it was getting up in miles and when I was made an offer for it which I could not refuse, it was time to go shopping.

I stumbled upon a 1966 Chevrolet Chevelle SS with a straight body for $300 (yes, I know it would be worth at least 100 times more if I still had it today). It wasn’t perfect – it had a rear window leak, and when I went to the gas station it was “fill it up with oil and check the gas”. 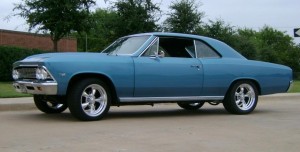 The Chevelle had its original factory paint – Marina Blue Polyester from Ditzler® Automotive Finishes. After nine years of probably being rarely (if ever) garaged, the Chevelle’s paint had faded. Significantly. Chevrolet’s Marina Blue had faded to a bluish tinted off-white.

Paint fade is actually caused by the ultraviolet (UV) rays, from sunlight, which go through the paint and destroy the photons of the color in the paint, almost like a filter. While many believe paint fade from UV rays is the only cause of fade, there are other reasons. The color loss also occurs when pigment is washed out of a paint resin which is pitting or dissolving. Pollutants and other chemical and biochemical residue will cause degradation leading to fading. Things like pollutants in the air (too small for the eye to see, but solid particles in the air which build up over time), bird droppings, salt and insects all contribute in one way or another to the fading of not only my prized 1966 Chevelle, but also to paint fade on pole buildings.

Diligent potential pole barn owners will leave no stone unturned and virtually no concept misunderstood when shopping for a new pole building. Questions get asked like how will the wood be treated to ensure the longevity of below-grade structural members? At what distances will trusses be spaced? But what about paint systems?

Anyone can be expected to grasp basic concepts like fade – bold brown siding which now looks like coffee with two creams is easy to spot.

Fade is measured in NBS or E Hunter units, with 1 Delta E being the slightest color differential perceptible by the human eye. A change of 5 units is slight, and a problem to consider primarily when new and weathered material will appear near each other on a wall or roof. The best performing paints, Polyvinylidene Fluorides (or PVDFs) like Kynar® 500/Hylar® 5000, won’t change more than 5 units over 20 years or more.

When I was first constructing pole buildings, in the early 1990’s, we constructed a backyard garage for an acquaintance of mine – not far from where I live. When the building was just a couple of year’s old, a nearby tree decided to fall on it, entailing the replacement of eight panels of roof steel, as well as the rake trim.

The replacement steel and trims were delivered – from the very same manufacturer as the original order. My construction crew chief called me from the jobsite, after arrival, to ask why we had shipped Charcoal Gray replacement panels, when the original building was Light Gray…..well, the first steel panels were Charcoal and had faded to an ugly Light Gray in only two years!

Polyester paints (like what was used on my friend’s building), offer a broader color spectrum than formulations such as Kynar® 500. However the brighter and darker colors, especially reds and blues (like my 1966 Chevelle SS), are most prone to fade.

While sunlight can’t be removed from the paint fade equation, there are steps which can be taken to minimize paint degradation. Think of the paint on a pole building, like automotive finishes. A good regular washing, with non-abrasive cleansers makes for a starting point. I know of several people who semi-annually give their pole buildings a coat of spray wax after washing. Waxing can provide a shine which rivals polishes, with some advantages.

Waxing doesn’t remove any of the paint’s surface through abrasion, instead it adds an extra layer over the paint finish. This extra layer provides additional protection.

You can’t fool time and it will eventually take a toll on a pole building’s paint color by fading it.

My recommendation – to have a pole building which looks as close to new as possible in 20-30 years, spend the money for a high quality paint system.