Lumber Twist: Spiraling Out of Control

In 1960 Chubby Checker did a cover of the Hank Ballard and the Midnighters 1959 song “The Twist”. Checker’s cover reached Number One on the Billboard Hot 100 both in 1960 and again in 1962, becoming the only single to reach number one in two different chart runs.

While “The Twist” was a musical hit, the twist in lumber poses concerns, if not panic.

It would be all well and good if trees could be trained to grow so as they only produced straight-grained lumber. Fat chance of this happening.  In fact, straight grained lumber is by far the exception, rather than the rule. 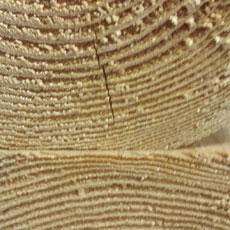 Instead, spiral grain is the expected pattern – where the term describes the helical orientation of tree fibers which gives a log a twisted appearance after the bark has been removed. The twisted appearance is even more highlighted by surface checks, which follow the grain fiber, making the spiral grain very obvious in some standing dead trees and on utility poles and posts.

The spiral may be in either direction, be fairly constant in any one tree or may change with tree age. In some trees, there may even be a reversal of the spiral in successive zones of growth forming an interlocking grain. Lumber twist is a function of degree of the spiral. The greater the spiral, the greater the chance you will see lumber twist.

Most typically the prevailing orientation is in the left direction near the pith, with the angle increasing sharply in the first-formed rings in juvenile wood. This gradually decreases to a straight-grain, then is followed by a gradual change to a right-angle spiral. Trees with left spiral do tend to twist more with changes in moisture content, than those with both left and right-spiraled grains.

Spiral grain may seriously reduce the strength and stiffness of lumber milled from a given tree.  The “slope of grain” in sawn lumber is considered as a defect, and is the resultant of natural spiraling.

For purposes of visual lumber grading rules, the slope of grain is the deviation of the wood fiber from a line parallel to the edges of a piece. The deviation is expressed as a ratio such as a slope of grain of 1 in 8, 1 in 10, 1 in 12 and 1 in 15. Slope of grain as measured is representative of the general slope of the fibers and local deviations are disregarded. The bigger the bottom number the straighter the grain is. Less lumber twist gives you stronger boards.

Typical No. 2 grade framing lumber allows for a slope of grain of up to 1 in 8 (an inch of slope for every eight inches of board length). This consideration takes into account how this defect accordingly adjusts the allowable strength values used in engineering design.

Around my home in Spokane, WA are many Tamaracks. They grow very tall and straight, up to 150 feet.  Because they are so straight with very small change from bottom to top in width, the grain is also quite straight, making them very strong.   Straight grain makes great truss lumber.

If you get lumber that is marked either DFL or DFirL, these are Douglas Fir-Larch.  Tamaracks are Larch, and this type of lumber tends to grade out high, so it gets used where machine stress rated lumber gets used for trusses and glu-lam beams.

The next time you see a glu-lam beam or watch as trusses are lifted into place, think of the tall straight and strong Tamaracks, giving you a lifetime of using your new pole building.  Put on The Twist and dance the night away!

Why DIY Clients Do Great Work
Over 50% of all Hansen Pole Buildings kit packages...
A Door Guide with a Roller, When to Pour Concrete,...
DEAR POLE BARN GURU: I am looking for a bottom gui...
Why You Should Install Post Frame Roofing Before t...
Over roughly 40 years of post frame construction, ...