Is Galvanized Steel Siding an Eyesore?

Like many things, beauty is in the eye of the beholder. I recently saw a photo of a McMansion in Florida, valued at eight figures, with a galvanized steel roof. Personally, I thought it looked pretty darn nice (as did the architect, builder and home owner apparently).

What got me going on this subject was a recent blog posting in the “Ask The Mayor” column of the Aberdeen (South Dakota) News: 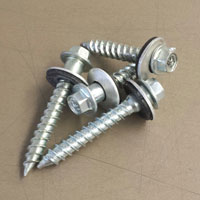 “Q. What can we do about a home in our neighborhood that is a disgrace? There are no gutters, the deck fell off and now we hear the owner plans to put up ugly galvanized steel siding just like on a pole barn.

Is there an ordinance that will prevent this owner from doing something that will be an eyesore for the whole neighborhood? Are there rules about what kind of siding can be used?

A. When the building permit is applied for prior to starting a siding job, the applicant has wide latitude in the choice of type, color and design of the siding. There is no specific prohibition of this particular siding choice in the building code.

Why not? As has been noted before in this column, the city building codes consider property rights as a major consideration when balancing aesthetics with freedom of action.

That leaves it open, for example, for a person to paint their house any bizarre color. Home designs have great latitude to be wildly unconventional as long as they stay within the safety and minimum construction standards.

Does that leave neighbors with any alternative? One possible avenue is the city nuisance code, which lists things which are prohibited because they are contrary to the general welfare.

Among those nuisances is listing number three in section 28-118 of the city ordinance book:

No person shall do something which “Does or tends to lower the value of adjacent real estate because of unsightliness.”

If you are living next door and having to look at what you consider an eyesore every day, this language appears to be definitive and easily applied. But, it isn’t an easy determination to make; it’s hard to prove and could be challenged by the property owner. It is more typical for these disputes to be resolved by civil court action (or threat of action) rather than by government imposition.

An issue regarding unsightly, galvanized siding in residential areas has not come up, probably because it is contrary to an owner’s interest and would lower the value of their own property. Now that this project is apparently a looming threat to this neighborhood, neighbors can ask for an evaluation as to whether the nuisance code application is justifiable.

The question sent in did not specify the exact address in question. If the property owners in the area feel compelled to take action to stop that siding project, they should contact the city planning and zoning department, make their concern known, and file their complaint.”

There are many architectural instances where galvanized steel siding (“just like on a pole barn”), is not only used, but is specified by the architect. I’ve supplied 22 gauge 2-1/2 inch corrugated galvanized steel for a mansard facing of a downtown hotel in a major metropolitan city. The hotel was considered a historic building and the refurbishing had to be done, to essentially match what had been on the structure for nearly a century.

Personally, I feel the mayor’s opinions are spot on!