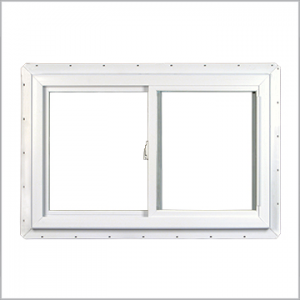 Back in the early days of my career in the pole (post frame) building industry, the great majority of pole building windows were single glazed (one pane of glass) in anodized aluminum frames. These were several things, none of which would be associated with high quality, all of which were about low price.

It wasn’t long before we arbitrarily upgraded to dual glazed, far less for the benefit of the end users, as was the ability to ship them and install the dual glazed windows with far less chance of them breaking.

Not long after I began building pole buildings in 1991, we went to all vinyl windows https://www.hansenpolebuildings.com/blog/2012/09/leaking-windows/

Hansen Pole Buildings has been providing Silver Line by Anderson vinyl windows: https://www.hansenpolebuildings.com/blog/2013/02/andersen-windows/, which are available in White or Almond. While most pole building clients pick white vinyl, I may be an exception to the rule on the pole building at my house at Newman Lake, as it has almond vinyl -which went nicely with the cedar channel siding, which is an entirely different story.

There are other alternatives to these colors which some of our clients have availed themselves to: Krylon Fusion for Plastic® Aerosol Spray Paint.

According to the manufacturer: Krylon Fusion for Plastic® is a revolutionary No-Prep, Superbond Paint for Plastic®. It is available in 36 colors, which can be used to paint the vinyl of a vinyl framed window. No sanding or priming is required. It bonds easily to most plastics, PVC and resin. It dries fast and is fully chip-resistant after seven days.

I’ve not used Krylon Fusion for Plastic® myself, but I can see some projects around my place where I am certainly willing to give it a shot (pun intended). Most of the product reviews on Amazon.com were favorable and it is rated as a four star out of five product.

Oddly enough, Krylon Fusion for Plastic®, is not available at either of the two major “big box” building centers, Lowe’s® or The Home Depot®.