Author’s Note: This is part 2 of a series of blogs written from a 6500+ motorcycle trip from WA to Ohio and back.  See Blog from Oct. 15th for the beginning…and hang on for the ride!

In yesterday’s post, I had mentioned all of the old barns I saw falling down. Not a single one of them had the appearance of being what I would term a modern post frame building.

I did happen to notice three new post frame buildings under construction. 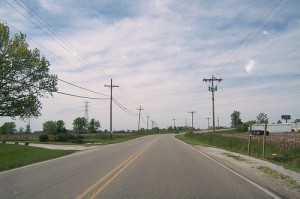 The first of these was seriously one of the largest post frame buildings I have ever seen being built. From the highway, it appeared to be well over 200 feet in length, with a center clearspan and large side sheds on each side.

The second was a smaller building, probably about 24 foot by 36 foot. I was impressed by it being very similar to what I would term as a Hansen Pole Buildings “Classic” pole building. By Classic, I mean it had main truss bearing columns every 12 feet, with double trusses aligned with the columns. Considering most of the area I was travelling would consider the “only” method of post frame construction to be columns every eight feet, with truss carriers (headers) spanning between the columns and single trusses placed every four feet – I was impressed by what would have been viewed as “outside of the box” construction.

The third building I saw had 40 foot span trusses and side sheds. The crew was working on the building as I rode by – placing trusses using a large all terrain forklift to raise the prefabricated roof trusses into place. I couldn’t help but think of all the money being spent on the equipment, the amount of extra work to do everything “in the air”, not to mention the safety risks involved.

I recently had a question posed as to where to get “winch boxes”:

By use of this method of lifting trusses into place, the trusses, their bracing, and all of the roof purlins can be lifted into place without the need for heavy equipment. All of the framing is done on the ground, other than the placement of every other bay of roof purlins.

Coming from the land of frequent safety inspections from OSHA (in the case of the State of Washington “WISHA”) – I was appalled to see the construction crew on the last building working 20 feet above the ground, without any type of safety harnesses, or scaffolding. Besides the huge potential for a debilitating (or fatal) fall, the contractor also was running the risk of a significant fine, should the crew be caught by the “safety police”.

See you tomorrow for Day 3 of viewing pole building construction across the U.S. & Canada from WA to Ohio…and back!