A New Pole Building: What is the Price per Square Foot?

What Is The Price Per Square Foot? 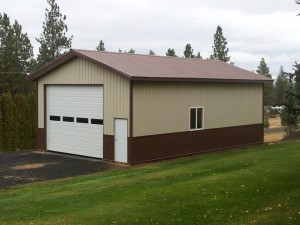 One of the owners of Hansen Pole Buildings has been asked this question probably a thousand times, if she has been asked once. Her answer…..about three dollars per square foot.

Wow!! That is an amazing price!

Which she qualifies with, “as long as the building covers over an acre, is eight feet tall, galvanized roof and no walls”!!

In the end, a “price per square foot” is nothing more than a price. It tells no one anything about what is or is not included.

Price per square foot ends up being nothing more than smoke and mirrors…far too easy for salespeople to throw out ridiculously low numbers, which tell the consumer nothing.

A building which is a basic box, is certainly going to be far less per square foot, than one which is “fully featured” and may include numerous overhead doors (more if insulated and remote openers are included), entry doors (with huge disparities in price due to quality), windows, overhangs, insulation….getting the hint yet?

The individual’s needs, personal choices and the complexity of the building all impact the bottom line price.

The same goes for the labor to construct. A builder who will give a price per square foot to construct a pole building, without knowing the particulars of the building, is one who should be steered clear of.  He (or she) is a train wreck waiting for an unmarked road crossing.

Shopping for a pole building? Do a favor to everyone, including yourself and avoid asking the question, “What is the Price per Square Foot”?

Instead, figure out your budget, then figure out what you would like to have in the way of a new pole building, making a list of all of the “wanted” features.  Prioritize the features and options so if you need to bring your budget into view,  you can then put a “hold” on one or more features. Which ones to put on the “maybe” list?  Those which can most easily be added at a later date, such as interior finishing, even doors and windows.  If you want overhangs or want to load trusses for a future loft – leave those on the “must have” list, as they are not as easily added at a later time. Then adjust budget/wish list until you have a “match”.

2 thoughts on “A New Pole Building: What is the Price per Square Foot?”