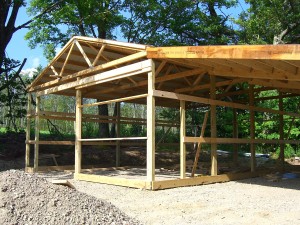 I’ve been in the post frame (pole barn) industry for over three decades now, and I’ve never seen the “pole barn” used as a metaphor for anything by the mainstream media. Well, knock me over with a feather, here it is!! Now IMHO (in my humble opinion), the author doesn’t have a true grasp of what “pole barns” are all about – hopefully he has a better hold on his political views.

(Disclaimer – I am not promoting any particular political belief or disbelief in the use of the excerpt from this article.)

In the July 20, 2013 Ohio Conservative Review, an article written by Brad Beckett contained the following:

“In recent years, however, the GOP has been transforming itself from a “big tent” into what I would describe as a big “pole barn.”

A pole barn has a very simple & efficient structure.  It’s basically several poles ringing a rectangular perimeter supporting a roof supplemented with trusses.  It’s commoditized and can be built with few and easily obtained materials.  Its value lies in that it can be quickly built and hold a lot of people.  Serving warehouses, restaurants, social clubs, entertainment, and even churches, it’s a one-size-fits-all model that can be transformed into virtually anything.

The GOP has gradually moved away from being a grand, powerful “big tent,” consisting of many core components all working together towards a common belief system– something bigger than life itself, with ideas divinely inspired.  Gone are those mighty poles representing sacred and firmly held beliefs–the center poles around which hoards of people once rallied.

In fact, when you’re in a pole barn, there is generally nothing in the middle, except what you might temporarily place there.  When people fill it up, the supporting poles are seemingly insignificant and are hidden from view–normally ringing the side behind a veneer–out of sight and out of mind.  They keep the weather out and let people in–that’s all.

That is the danger today’s Republican Party faces as it transitions from a big tent into a pole barn.  Its goal is to allow as many people inside as possible.  Fielding candidates that can merely “win” is the order of the day.  They no longer have to be brand label; they’re commodities, bought in bulk and sold at a discount.”

Rather than a “one-size fits all” model, the pole building is far closer to being a model which allows each person to have a size customized specifically to fit their needs. If a pole barn was to be analogous to political thought of a particular party, we would need to have hundreds of thousands of political parties in the United States, as the design solution which best fits one, is not likely to fit the next person’s needs.

One thought on “Pole Barns & Politics”