This story appeared in the Windsor, Ontario, Canada Star June 27, 2013:

“Firefighters had to use a metal cutter and giant airbags Wednesday to rescue a man trapped under a barn collapse.

“Upon our arrival, there was one person that was trapped underneath the trusses,” said Essex Fire Chief Ed Pillon.”He was conscious, alert, but his lower extremities were pinned underneath some roof trusses with his legs embedded in the ground.”

One man suffered a broken ankle in the collapse. Another had a broken leg. A third man also working at the site wasn’t hurt.

Emergency crews responded shortly after 11 a.m. to the large property on County Road 12 in Essex. Pillon said the call was for a barn collapse with one person trapped.

He said firefighters lifted the debris off the trapped man using airbags and a metal-cutting saw, then slid him onto a backboard. 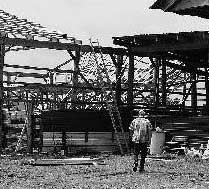 “A second person managed to jump out of the way,” said Pillon. “He had injuries also but he wasn’t trapped.” Sgt. Dave Dibbley with Essex County OPP said the trio was putting roof trusses on a new barn.

“There were three of them on the trusses trying to stabilize them and straighten them out after putting them up,” said Dibbley.

“While they were doing that, about 10 of the trusses came down and brought all three of the guys down.””

Prefabricated wood roof trusses can be great and wonderful things, they allow for buildings to be constructed affordably, with spans which could not have been imagined before their advent.

The pole building pictured above, uses widely spaced trusses, set on top of headers (also known as truss carriers). As constructed in this case, none of the trusses appear to be directly connected to the columns – which could possibly have prevented the barn collapse and injuries from occurring. This is just one of the many reasons my personal preference for post frame construction is to use two ply trusses, spaced 10 to 14 feet on center and directly connected to the bearing columns.

What do I mean by directly connected?

First a notch is cut into the columns where the trusses can sit within this notch for full bearing. Second, secure the trusses with bolts or LegerLoks®. Don’t get in a hurry to get all the trusses up before bracing them. The quickest and easiest way is to start putting purlins as well as all permanent and lateral and X bracing in as you get each truss up.  Put in the bottommost purlins, the ridge purlins (tightening the bays as you go) and at least every other purlin in between as your “temporary” bracing for the roof. This type of assembly and connection greatly reduces the probability of toppling.

The Wood Truss Council of America (www.woodtruss.com) and the Truss Plate Institute (www.tpinst.org) have produced a document BCSI-B10 for “Post Frame Truss Installation and Bracing”.

From the NDS (National Design Specification for Wood Construction):

“The erection of wood trusses is inherently dangerous and requires, above all, careful planning and communication between the erection contractor and the installation crew. Construction accidents can happen, but planning the actions of all construction personnel involved beforehand greatly reduces the probability of an accident.

That, my friends, needs to reign supreme in any construction project: jobsite safety.  ‘Nuff said.