Eric, one of the owners of Hansen Buildings, was chattering with me today about the number of interesting telephone calls he fields. Many of these are probably due to this blog, as well as “Ask the Pole Barn Guru” – the weekly advice column for those with pole building questions, concerns, or who just are looking for free therapy.

A gentleman had recently erected a pole building, and placed six ml (0.15 millimeter thick) clear plastic visqueen as a vapor barrier between his sidewall girts and wall steel. 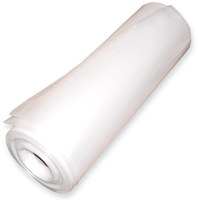 Visqueen is a brand of polyethylene plastic sheeting produced by British Polythene Industries Limited, and has become a generic description for any plastic sheeting (think Kleenex). Because I know lots of near worthless trivial information, it is important to know Visqueen was first produced about 1950 by the Visking Corporation, a company founded in the 1920s by Erwin O. Freund for the purpose of making casings for meat products. Visking investigated the post-World War II emerging technology of polyethylene, and developed manufacturing techniques to make pure virgin polyethylene film. Originally spelled VisQueen, the film is an excellent moisture barrier and was marketed to many industrial, architectural, and consumer applications, such as moisture barriers, plant seedbed protection films, building fumigation barriers, drop cloths, case liners, and tarpaulins.

Anyhow, in the application above, there isn’t any problem….until the building owner wants to insulate the building walls, then place another vapor barrier on the inside of the walls.

Every Fall, when I was a youngster, my grandmother would make massive quantities of apple sauce, at their lake cabin. All of the wonderful smelling boiling concoction put lots of water vapor into the air of the kitchen. When this warm moist air met the nice cool window glass, it became condensation. The same happens with any surface or material which stops vapor. For example, the painted surface of the drywall will also prevent most moisture from passing through …. which is why higher gloss paint is used in kitchens and bathrooms. If the drywall were not painted, the moisture / vapor would simply absorb into the drywall material. So think of the paint as a type of moisture barrier to protect the drywall.

But vapor can occur even without obvious introduction of moisture into the air. Wherever warm air meets cold air there will be a high concentration of vapor in the area. So wherever the vapor barrier is placed in a wall is where the condensation will occur.
Think of it as a cold and warm weather front meeting inside a wall …. and the forecast is rain.

The condensation held by the vapor barrier will eventually go back into the air once the volume of vapor decreases. This is allowed to happen only if there is good ventilation on both sides of the barrier.

Vapor will penetrate any material in its way until it hits a barrier, this is why it is important to position vapor barriers on the warm (inside) side of walls. When warmer air meets colder air condensation will develop. Imagine the damage to insulation if the barrier was on the outer side of the insulation? Warm air (and/or moisture) would create condensation on the vapor barrier which would eventually absorb into the insulation causing all kinds of water damage and possible mold growth.

Our friend would have been so much further ahead by having used a house wrap between the wall girts and the steel siding, as house wrap is permeable (it allows excess moisture to pass through).

My expert advice would be to slice holes in the visqueen to allow any accumulated moisture to pass through.

Questions from a Future Barndominium Owner
Reader JASON in WINDSOR writes: “What are ways ...
Paint Fade
When I went off to architecture school at the Univ...
Need an Engineer in Utah?
I’ve never met or spoken with engineer Max Gregers...

134 thoughts on “Moisture Barrier: A Bad Place for Plastic”