Home >> Uncategorized >> Insulation: When the Fold Hits the Fan

Insulation: When the Fold Hits the Fan

Greg, one of my blog readers, posted a comment online in regards to using ¼” foam fanfold insulation between roof purlins and roof steel. While I have seen this used, I have never done it myself, so I felt it was due time to get on my research tennies and find out more. 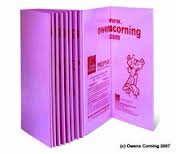 Fanfold insulation is an extruded polystyrene foam insulation which is designed to be applied to the exterior walls of homes, between sheathing (or pre-existing sidings) and usually vinyl siding. Its purpose is to provide thermal protection and to form a second barrier between the elements and the framing. When used over existing sidings, it provides a flat nailing surface for quick siding installation.

Products such as Owens Corning Foamular® are typically used in traditional low slope commercial roof applications where the insulation is placed below the roof membrane.

Class A (the best) fire resistance rating is based on ASTM E108 testing of fire spread, and in the case of wood decks, penetration, on the top side of roofs. Ratings are based on complete assembly performance and depend on variables such as deck type, membrane type and the slope of the roof. Commonly extruded polystyrene insulation products have some type of cover placed over them before the roofing membrane is installed. Cover materials include board products like gypsum or high density wood fiber. Or, depending on the type of membrane, a slip sheet may be used.

Polystyrene happens to be an environmental nightmare, as it is nearly non-biodegradable and is seldom recycled. It ignites easily and when it does it releases some nasty gases. These include Benzene, a highly carcinogenic substance, and styrene which is readily absorbed through the skin, respiratory system and gastrointestinal tract. Exposure can cause deep unconsciousness and death. The vapor can damage the eyes and mucous membranes. Styrene gas releases a great deal of soot when polystyrene foam is burned. The soot is dangerous to the respiratory system when inhaled.

Out of curiosity, I looked into the cost of fanfold insulation. A major home improvement (big box) store, retails 200 sft (square foot) bundles for $33.25 before sales tax. This works out to being just under 17 cents per square foot. In the product description, it states it is perforated to allow excess moisture to escape, and lists the R value as being one.

In order to qualify as a residential vapor retarder, a product must have a water vapor perm rating of 1.0 or lower (the lower the number the stronger the vapor retarder).  Foamular® is rated at 1.1 perm, based upon a one inch thickness. The product does NOT qualify as an effective vapor retarder.

If Foamular® is relied upon to create an air and/or moisture barrier, then joints should be sealed. However, due to penetrations and other practical considerations, it is often more efficient to install air/moisture barrier layers elsewhere in the assembly rather than try to seal the joints.

My summation – fanfold foam should not be used between roof purlins and roof steel in an attempt to control condensation. Even with sealed joints, it does not have a perm rating adequate for its intended use. If used, in order to prevent a plethora of problems in the event of fire, a layer of fire resistive material such as 5/8” type X drywall should be placed over the purlins first – which creates a potential for an entirely new set of issues due to lack of shear strength of materials.

For a cost effective vapor barrier system, look to using a reflective radiant barrier which has been manufactured with a tab on one long edge which has a PSA (pull strip attached) covering an adhesive. It’s simple, cost effective, and performs well if installed per instructions.

Reviewing Your Building Plans
Every Hansen Pole Building Kit Package comes with ...
1000
One thousand – it can be a very large or very smal...
Your Pole Building Price is Higher
Your Package is a Considerable Amount More!“I like...

2 thoughts on “Insulation: When the Fold Hits the Fan”