Insured thunderstorm losses are much higher than they have ever been, and there is no sign they will return to lower levels any time soon.  Moreover, the current state of the insurance industry—from the focus on heavy marketing to standard replacement cost coverage on roofs—exacerbates these losses, creating a real “roof problem.”

While it is difficult to get a handle on the number of thunderstorms each year in the U.S., it seems fairly clear the number of severe storms has gone up.  A recent study shows inflation-adjusted annual losses due to severe thunderstorms have doubled since 1970!

The median age of pole buildings in the U.S. is steadily increasing.  This means in many parts of the country, the majority of pole buildings still have their original roof, which makes them particularly susceptible to damage for two reasons: Older roofs are more likely to fail in storms than newer roofs, and older roofs are more likely to be built with less resilient materials than newer roofs (as newer materials did not exist and/or were not generally in use).

The price of roof replacements has been increasing for at least two reasons: The cost of asphalt shingles has outpaced inflation for several years now, and building codes and roofing best practices have resulted in more time and materials requirements in a typical roof replacement.  The most extreme and perhaps industrydefining state is Florida, which adopted an extremely strict building code after Hurricane Andrew, and which has the most expensive roofs in the U.S.

Most building owners’ insurance policies provide replacement cost coverage on roof damage due to a thunderstorm.  As the number of severe storms has increased, roofs have aged, and the cost of roof replacement has increased, carriers have felt the pain of replacing roofs at a cost which can take more than a ten-year payback period.

Finally, “storm chasers”—businesses which go door-to-door in areas hit by storms (both immediately after, and, in slow periods, months after) to do roof repairs and be paid by the carriers—have exacerbated the roof problem.  The main concerns about storm chasers are they may be acting fraudulently by actually causing damage to the roof (under the pretext of “going up there and checking things out”) and/or by taking the claims check and not actually doing any repairs (or doing a terrible job). 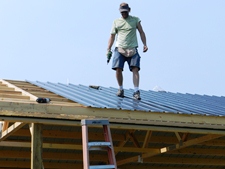 There is a solution which ends the cycle – steel roofing is very tough and highly resistant to hail damage. Hail will not penetrate a steel roof. Even a new asphalt shingle roof won’t protect a building from the next hailstorm. In fact, many steel roofing products have the highest impact resistance and hail rating (Class 4) granted by Underwriter’s Laboratory (UL). This means a sample of the product did not crack when hit twice in the same spot by a two-inch steel ball, which, in a storm, would translate into a huge hailstone. As a result of steel roofing’s superior performance in hail prone areas, some insurance companies even provide a reduced rate for pole buildings protected by steel roofing.

It’s no accident every one of my 5 buildings currently have steel roofing (one formerly had asphalt shingles, replaced by steel after wind damage).  If I am going to go to the trouble and expense of putting on a roof – I only want to do it once.