The first time I was exposed to finger joints in wood and actually noticed them, was when I was working for Lucas Plywood and Lumber of Salem, Oregon in 1979 (yep, back in the Dark Ages).

I will digress momentarily….

My son recently turned 18, but when he was younger he had some interesting questions to ask of his Dad, whom he must have thought was very, very old. They included a couple of my favorites,

“Dad, was it exciting to watch the Space Aliens help build the pyramids?” and “What was it like playing Nintendo by candlelight?” 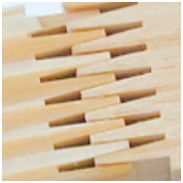 Moving forward in the time warp machine….Virgil Lucas had made a deal with Weyerhaeuser to buy a bunch (defined as numerous truckloads) of finger jointed dimensional lumber 2x4s up to 2×12. Virgil was always one to look for a bargain, so I am sure the price was right. The Willamette Valley of Oregon was primarily a green lumber market, so the guys who had to throw loads together in the lumber yard were pretty excited to get to handle the light weight kiln dried finger jointed stock.

I never gave much thought to what was happening with finger joints themselves, until I worked as a field sales representative for a company which manufactured glue laminated columns for post frame buildings. It was then I began to realize what a huge science was actually happening, in such a small part of a given piece of lumber.

While splicing two pieces of wood together end-to-end might on the surface seem to be not such a big deal, the reality is that it has always been challenging and at times difficult.

Wood is strongest parallel to its grain. The problem is wood cannot be bonded sufficiently well end grain to end grain with existing adhesives and techniques. Wood can, however, be bonded quite effectively with most adhesives side grain to side grain. And generally quite easily.

The solution to being able to bond side grain to side grain (without overlapping two pieces of lumber) is the “finger joint”.

Finger jointing wood is not new. The automobile industry was using it a century ago for wood steering wheels and the spokes of wood wheels!

Finger joints can either be structural, or non-structural like the roaring 20’s automobile steering wheels. Nonstructural finger joints are used when strength is not a primary concern and where the goal is to remove natural, but unwanted defects in order to join shorter pieces of material into lengths long enough to be useful. Besides the steering wheel, other common examples are wood moldings, trim, siding, fascia boards, door jambs and window frames.

Structurally, finger joints are often seen in glue laminated beams and columns and the top and bottom members of I joists.

End-jointed structural lumber two inches or less in nominal thickness and up to 12 inches in width are accepted by the Building Codes as being interchangeable with solid sawn lumber. This acceptance is subject to the material having been manufactured under a certified program.

The geometry of the finger joint largely dictates it potential strength. Studies have found the thinner the “tips” of the fingers are, the stronger the joint. Longer “fingers” also produce stronger joints.

There are five basic steps to the manufacture of finger jointed wood products. They are: selection and preparation of the material, the forming of the joint itself, applying the adhesive, assembling the joint and curing the adhesive.

The portion of the wood to be joined should be free of knots or other strength-reducing defects. In most cases (and, as far as I know all) involving glue laminated columns for post frame buildings, the lumber being joined has been dried to a moisture content of 15% or less.

Come back tomorrow and I’ll tell you how the fingers are made and glued together….in Part II of Finger joints.

Wood I-Joists for Your Barndominium
With many barndominiums being multi-storied, or at...
Pressure Treated Lumber
Preserving Wood Columns Beyond Code Requirements ...
Construction Tape, Instead of Nails to Build Pole ...
I’m always on board (pun intended) for new, intere...