Considering a new pole building? An important question to ask is, “What will the cost be to upgrade the roof trusses to support the weight of a ceiling”?

Most post frame (pole) building trusses are not designed to support the dead weight (things which are permanently attached to the building) of anything other than the trusses themselves, required bracing and minimal wiring and lighting. In most cases, the necessary load carrying capacity on the bottom chord of the trusses is one psf (pounds per square foot). 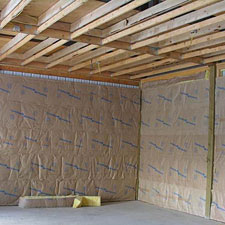 But – isn’t a ceiling fairly light? It will depend upon what the ceiling is going to be constructed of.

In the case of probably the lightest assembly – steel liner panels, the weight of the liner needs to be accounted for. A cubic foot of steel weighs 489.024 pounds. The thinnest 29 gauge steel measures .0142” thick. If the panels were totally flat, they would then weigh 0.58 psf (pounds per square foot). But liner panels are roll formed, with a 36 inch net coverage coming out of a coil which is typically about 40 inches in width. Figure a minimum thickness 29 gauge panel at about 0.65 psf.

Insulation is fairly light, but still must be accounted for. Fiberglass adds 0.04 psf per inch of thickness, cellulose 0.14 psf per inch.

This gives the weight added for a steel ceiling with 16 inches of cellulose blown in above at 3.26 psf (1.66 psf for fiberglass).

With the assumption fiberglass insulation will be blown in, I would normally recommend the bottom chord loading be increased to three psf for a 29 gauge steel liner.

How about other materials?

But what if the trusses were NOT designed to support ceiling loads?

Trusses engineered to support ceiling loads are going to be more expensive than those which do not. Depending upon the span of the truss and the applicable snow loads, the cost could be minimal, to very expensive.

With trusses of large spans, it may prove impossible or impractical to upgrade them to support the added ceiling loads.

Repairs (when they can be done) typically include doing one or more of the following:

Any truss repair (such as increasing load carrying capacity) should always be designed by a registered design professional (an engineer), and a sealed drawing provided by the engineer.

It is always easier, and less expensive, to pay for the ceiling load to begin with.

LP Siding, Ceilings, and an Inspector's questions!
This Monday, the Pole Barn Guru discussed attachin...
Floor Limits, Foam Board, and Consider True Costs!
DEAR POLE BARN GURU: If I wanted a pool table in 2...
Truss Weight
I have been asked this question more than a few ti...