Do It Yourself Pole Buildings: The Ikea Effect

Thanks to Hansen Pole Buildings Designer Bob, for his inspiration on this post!

Have you ever spent a couple of hours working on a craft project — or a presentation for work — and then fallen in love with the accomplishment? Do the colors picked for the PowerPoint background pop so beautifully you just have to sit back and admire your own genius?

If so, get in line: You’re the latest person to fall victim to the Ikea Effect. 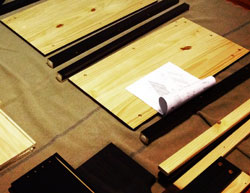 “Imagine that, you know, you built a table,” said Daniel Mochon, a Tulane University marketing professor, who has studied the phenomenon. “Maybe it came out a little bit crooked. Probably your wife or your neighbor would see it for what it is, you know? A shoddy piece of workmanship. But to you that table might seem really great, because you’re the one who created it. It’s the fruit of your labor. And that is really the idea behind the Ikea Effect.”

In a series of experiments, they have demonstrated people attach greater value to things they built than if the very same product was built by someone else. And in new experiments published recently, they’ve discovered why it happens: Building your own stuff boosts your feelings of pride and competence, and also signals to others you are competent.

Having been involved with thousands of clients who have constructed their own pole buildings, over the past three plus decades, I’ve seen the results of those who have self-assembled.  It’s astounding.

Given specific plans and good directions, these do-it-yourselfers generally end up with a far better finished building than they ever could have paid to have constructed.  And to be honest, most of these folks are lucky to have used a hammer a time or two in their lifetime before they constructed their own pole buildings.

The why, is simple….people care about their own buildings. They don’t race through the construction process trying to cut corners to save money or ignore important details.  They read directions, study the plans and if they have a question….they ASK before making a huge mistake.  OK, usually they ask.  But even if they make a “boo-boo” they are quick to humbly admit it and ask for guidance in correcting it.

From advanced geriatrics, many older couples…hubby and wife teams… to dads building with their teenage daughters as a bonding experience, I’ve been able to witness a plethora of different combinations of age, as well as prior skill sets. When it comes to constructing a pole building package, the adage is true more often than not.

If you want it done right, do it yourself.