This is a true story, about the construction of an all-steel building; however the events could spell the doom of any building project – regardless of the structural framework.

Geo-technical engineers were called out to a jobsite to investigate why it was the concrete piers supporting an under construction all-steel building were unstable.

In August, eight months after the site work was completed, the steel erectors walked off the job, as they were unable to put the steel in place! Now what could have caused such an issue?

Snow does not make for a good building base 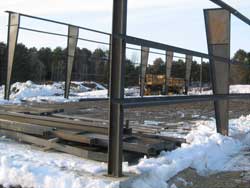 Well, the site work was completed the previous December. As part of the site work, bulldozers compacted earth over six inches of…..snow!

Anyone seeing a potential problem cropping up?

When the geo-tech engineers dug test pits, to determine what the soil issues were, they found the snow was still buried deep underground! The dozer compacted soil which was acting as a blanket.  This kept the covered snow in a mostly frozen state. As the snow began to melt, the concrete piers above the snow began to shift.

In order to complete the project, the steel erectors had to put the steel building on wheels and roll it out of the way. This allowed for a new set of footings and a foundation to be placed (once, of course, the snow was removed).

Here was one project which was going to go way over budget.  And probably resulted in a slew of legal actions back and forth as all involved pointed their fingers at each other, trying to escape liability.

It is recommended for contractors to read geo-technical reports, whether they appear to apply to them or not. Building owners should also make certain any engineering tests specified in the construction documents, or required by Building Officials, are actually carried out.