My life with roof trusses began in Spokane in the spring of 1977. I spent the first two plus years of my career in Spokane and later Coeur d’Alene, Idaho, before being hired to manage a roof truss plant in Salem, Oregon.

Having never been exposed to anything different, my assumption was all prefabricated roof trusses were assembled using pressed in steel connector plates. My world view, at the time, was fairly narrow – as I found out the largest competitors of my new employer, were building roof trusses which were held together with plywood gussets which were glued onto the truss lumber with Resorcinol glue! 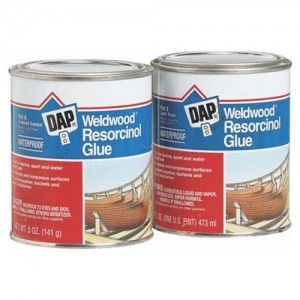 Resorcinol waterproof glue is a great (although expensive) product. It is a high performance, two component adhesive which is designed to provide the strongest, most durable bonds in severe service applications. After curing, Resorcinol is unaffected by either salt or fresh water, and other typically corrosive aquatic conditions, as well as outdoor exposure and temperatures ranging from tropical to subzero.

Most often, at least in a form most people are familiar with, it is designed to laminate structural wood beams (glu-lams).

The glue is made from resorcinol, sometimes called resorcin, which is produced when a large amount of resin is softened and combined with potassium hydroxide. Resorcinol in glue form is regarded as highly sturdy and dependable.

When using resorcinol glue, extra care should be taken to ensure the workspace is properly ventilated. Those handling the glue may find face masks necessary due to the pungent odor (alcohol and formaldehyde).

Resorcinol glue will cure at room temperatures (70 to 95 degrees Fahrenheit) and will cure faster at higher temperatures. Poor bonds result from use below 70 degrees – which leaves me now wondering about the long term quality and performance of my then competitors trusses, which were built in unheated buildings year around!

Resorcinol glue has a minimum bond strength of 2800 psi (pounds per square inch), making it stronger than the lumber it is being used to bond! This is why a finger-jointed piece of resorcinol glued lumber, when tested to failure, will have the lumber break, before the finger-joint.

Due to glue costs, the need for a controlled temperature environment and strict lumber moisture control may cause manufacturers to produce lessor quality products, which end users and the general public may not realize as being inferior.

Just a sidebar – boating enthusiasts find great benefit in using waterproof resorcinol glue. Whether used in the building of a new boat or the repair of an old one, this type of adhesive is considered to be the best glue on the market. It is so popular and well-respected it is the glue used by the United States Navy on their ships.