Recently one of the clients of Hansen Pole Buildings asked us to compare our building, to one being quoted by another supplier.

One of the “features” of the other providers building was building glulam columns which were built out of three 2×6’s which were both glued and nailed. 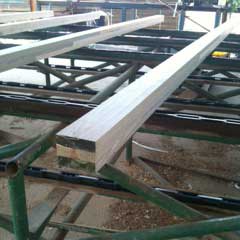 Whilst our client believed these to be a true glu-laminated column (and the other supplier promoted them as such), this is not at all the case.

These particular columns are constructed with pressure preservative treated lowers, finger jointed on to a non-treated upper. So far, so good – the finger joint is far superior to columns which are butt end spliced either with no reinforcement, or with a steel plate at the splice. A successful finger joint is the most difficult part of the glulam column process, and these people have it down.

The manufacturer then spreads construction adhesive on the faces of each ply and uses a through fastener (stainless steel wire) to keep the plies together.

Therein lies, “the rub”. In concept the construction adhesive reduces the potential “slip” between the plies, making the column stiffer in the weak axis.

In a true glu-laminated column, after laminating lowers to uppers with the same finger jointing process, each ply is face sanded. Fully water-resistant phenol-resorcinol adhesive is then applied, and the assembly is pressed together and cured in a temperature controlled environment.

The finished glulam column truly becomes a solid piece of timber. It resists warp, twist and cup far better than the construction adhesive and mechanically fastened column (as there is no potential for movement between the plies) and it is less flexible in the weak (skinny) direction as it is impossible to have between ply slippage.

I realize many consumers would not know the difference, but in my experience – a little research and a few “hard questions” gets the answers you may need to make your final decision.  My beef here is the company probably doesn’t know the difference, and is purporting them to be something….they are not.