Lauri is one of the newer members to the Building Design team at Hansen Pole Buildings. Pole buildings, while having the appearance of being fairly simple, are actually remarkably complex structures and involve the proper interaction of literally thousands of components.

Due to this, it is not surprising for a question to come up, which there is not an easy answer to. Today, Lauri came up with one for me….from one of her clients….

Having grown up in construction (my paternal grandfather, father and his five brothers were all builders), been involved in the prefabricated roof truss industry as an owner or in a position of authority for over two decades, and been a general contractor myself….I had never heard of “bridge bracing”.

Off I dashed to the wonders of the Internet….Googling and Yahooing as if my life depended upon it. 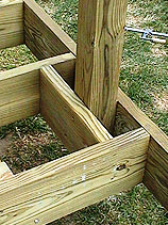 It took some doing, but I was finally able to find “bridge bracing” as it would apply to wood frame construction. And it wasn’t at all what I (or probably the client) envisioned.

Here is how the term is properly applied…..Say one is framing up an exterior deck. All of the joists, including the rim joist are in place. 4×4 or similar sized posts are fastened to the inside of the rim joists, to support a railing. On the side of the 4×4 opposite the rim joist, are placed two framing members as blocks, equal in size to the joists, and parallel to the rim joist. By use of adequate fasteners, this double block (the bridge bracing), keeps the post from rotating once the final assembly is in place.

My supposition is this client is fairly unfamiliar with post frame construction and has made some assumptions. These could include the prefabricated roof trusses are spaced every two feet, and the roof is sheathed with either plywood or osb (oriented strand board). These assumptions would be true, in the case of typical stick frame construction. Even in stick framing, the stiffness of the roof sheathing is such as to preclude the need for even a single solid block of 2×4, between the top chords of the roof trusses at any point.

Yes, blocking could be added, or in the case of a pole barn, the ridge purlins could be doubled. However, there would be no added structural benefit and it would add to the cost of the building in both materials and labor. As all our buildings are designed to support the weight of the roof, including the framing and whatever roofing materials are chosen, “bridge bracing” becomes a non-issue.