Any time my readers get to thinking I have linked every possible subject beyond reason to pole buildings; I try to one up myself. Which brings us to Fibonacci….

Leonardo Fibonacci was an Italian mathematician who lived from about 1170 to 1250. He is best known for a number sequence named the Fibonacci numbers, which he did not discover, but used as an example in his book Liber Abaci.

OK, so how am I going to hook our friend Leonardo to pole buildings? I am getting there. It turns out the sequential numerical elements of the Fibonacci numbers, approach what is known as “the Golden Ratio”.

De Divina Proportione, a three-volume work by Luca Pacioli, was published in 1509. Pacioli, a Franciscan friar, was known mostly as a mathematician, but he was also trained and keenly interested in art. De Divina Proportione explored the mathematics of the golden ratio. Containing illustrations of regular solids by Leonardo Da Vinci, Pacioli’s longtime friend and collaborator, DE Divina Proportione was a major influence on generations of artists and architects alike. 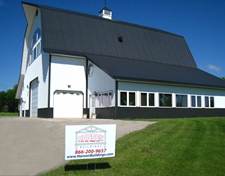 Fast forward to the popular “gambrel roof” barn. Roof slopes of 24/12 and 6/12 are proportioned with the golden ratio. The short side of the right triangle is one half the length of the long side of the triangle.

To create a gambrel roof with golden ratios…..

Use 24/12 for the steep portion of the roof, with the “pitch break” at 1/3 of the distance between the sidewall and the roof peak. The upper portion of the gambrel roof will be at 6/12 slope.

As an example, with a 24’ wide pole barn, the pitch break will be “up” eight feet and “in” four feet (2:1 ratio). The overall roof height in a 24 foot width, will rise 12 feet (2:1 ratio). A real life example is the White and Black Hansen Pole Buildings administrative office building, with a gambrel roof of exactly the golden ratio proportions.