Nationwide, more than 15 percent of all industrial buildings are tilt-up, ranging in size from 5,000 to more than 1.5 million square feet. A tilt-up building’s walls are created horizontally, similar to a 19th century barn-raising. Workers lay out wood forms on the project’s floor slab and set up grids of rebar inside each form. They then pour concrete into the form and when dried (or cured), remove the forms to leave large slabs of concrete panels. The panels are then lifted with a large crane or “tilted up” into position around the building’s slab, and held upright by critical connections to a relatively lightweight roof system. An experienced tilt-up crew can erect as many as 30 concrete panels in a single day.

Consider the following factors when competing with tilt-up concrete for building construction. 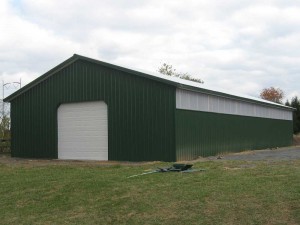 The building’s size is a factor. For projects less than 50,000 square feet, steel covered pole buildings are generally the least expensive alternative. For a building this size, the fixed costs of a tilt-up construction project (like the rental of a large crane) make it more expensive than pole buildings, even though concrete is usually a less-expensive raw material. However, as projects become larger than 50,000 square feet, the lower price of concrete starts to offset tilt-up construction’s fixed costs and this method becomes cost-competitive with a pole building.

With buildings requiring longer spans and bays, a pre-engineered pole building is the right choice. Wood’s spanning capacity is better than concrete’s. This is important for offices because it increases floor space flexibility. Pole building’s customizable column locations and depths offer adaptability to most floor plans, an important factor in remodeling. The greater number of support columns needed in concrete construction limits the moving of walls and partitions, and it reduces the amount of useable square footage.

One perceived drawback to long-span wood floors is their tendency to “bounce” or develop unwanted dynamic characteristics. Because concrete tilt-up has better damping, it doesn’t bounce as much. However, builders can limit the “bounce” in wood floors by limiting deflection using beams with a higher moment of inertia (i.e. greater depth) which will then limit deflection. Pole buildings require less complicated foundation systems. This gains importance when soil stability is poor.

Cantilevering with concrete is expensive, demanding form set-up and carpentry to hold the concrete until it cures. Cantilevering with wood joists means only specifying an extended end or a full-depth cantilever. Pole buildings also permit more glass on the building’s exterior than concrete tilt-up. This reduces a building’s overall energy consumption.

Pole buildings are 100 percent recyclable and “greener” than concrete. In the United States, steel roofing and siding is produced largely from scrap material. Steel’s recyclability allows contractors to take advantage of LEED (Leadership in Energy and Environmental Design) points. Building owners can work toward LEED certification by incorporating energy saving strategies which affect the complete cycle of a building from best construction practices to occupation, through the end of the building’s useful life. Strategies include choosing environmentally sensitive building designs, as well as materials and other assorted criteria, each of which can earn points toward certification.

Pole building components can be utilized in a building immediately, improving erection speed and can be constructed in cold climates. Concrete requires a heated environment when the temperature drops. Concrete tilt-up also requires mixing of different materials in exact quantities and qualities, a very time-consuming process.

Pole buildings take an average of one-third less time to erect than other types of construction.

Cement, used to make concrete, can experience a shortage in material availability. The shortage of concrete’s availability due to shipping rates and imported materials can drive up costs and limit supplies, despite growing demand.

Pole buildings have better strength and flexibility to protect in natural disasters such as  earthquakes, tsunamis and hurricanes. Stronger, more flexible pole buildings can withstand much of the pressure which topples traditional structures, and save lives in the process.

Pole buildings are ideal for seismic zones, as the components can flex and absorb energy from earthquakes.

A collapsed tilt-up concrete structure is often the cause of fatalities and injuries. Under high winds, a lightweight, tilt-up building roof can become compromised, adversely affecting its connection to its concrete panels. The Joplin, Mo., Home Depot, a concrete tilt-up building, has gained attention because of the 200-mph tornado winds which impacted it in May 2011. After its roof was lifted off, its concrete panels fell in huge sections like dominoes. Seven people were killed in the front of the store when the 100,000-pound walls collapsed on them. Twenty-eight people in the back of the store survived when those walls collapsed outward. Only two of the slab walls in the Home Depot remained standing.

For many types of disasters post frame buildings can easily be designed and engineered for what is needed to keep the occupants safe. The strength and durability of a pre-engineered pole building, if designed correctly, can easily exceed expectations.